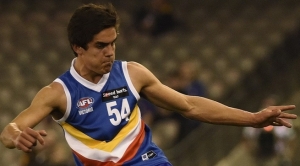 Joel Garner’s rise through the ranks to the Eastern Ranges’ 2015 TAC Cup Grand Final team was certainly a rapid one.

The 16-year-old was one of three players along with Adam Cerra and Jaidyn Stephenson to break into the finals-bound Ranges outfit after impressive performances for Vic Metro in last year’s NAB AFL U16 Championships in July.

Eastern eventually lost the Grand Final by 12 points to the Oakleigh Chargers, but the positive for Garner came when he was rewarded for good form with selection in the 2016 Level One (bottom-age) NAB AFL Academy squad.

Ahead of the Level One group’s camp in New Zealand that commenced on Thursday and concludes on Tuesday April 26, the Wandin junior reflected on his rapid rise to prominence last year.

“It was just a ‘right place, right time’ sort of thing,” Garner said.

“We (16-year-olds) were all in pretty good form at the time, but I didn’t really expect it at all. I thought I might have played a couple of games for the Ranges at the end of the year, but leading into the finals I thought they might have played some older boys.

“It was a really good experience and I loved every moment of it.”

Garner played the final three home-and-away games for Eastern and then the club’s elimination final and preliminary final victories before taking to Etihad Stadium in the 2015 decider. He averaged nine disposals per game and booted six goals in an indication of what he’ll add to the 2016 Ranges team.

Playing as a mid-forward, Garner had 17 disposals and booted two goals in the Round 1 win against the Calder Cannons, and tallied 19 disposals to go with one goal in the Round 2 victory over the Western Jets.

His smooth left-foot kick and overhead marking are among his strengths, along with his strong leadership ability. Garner captained Vic Metro at last year’s U16 Championships and also skippered the indigenous All Australian team – the Flying Boomerangs – in 2014.

“I had a bit of (captaincy) experience leading into the U16 Championships but I was really thankful the boys thought I was good enough for the job and I thought I did it well,” Garner said.

“I love leading and I think it comes pretty naturally. I’m not really afraid to speak my opinion... I love a good speech and love to lead on-field to set an example for the boys.”

Leadership is something Garner is looking forward to working on during the Academy’s New Zealand camp. The camp gives the Level One group a chance to bond with fellow new Academy members as they prepare to face off against a senior-age New Zealand Hawks team in Auckland and then attend an Anzac Day dawn service the next morning.

Garner will be hoping his recent good form continues in this year’s trans-Tasman clash and sets him on the same path.