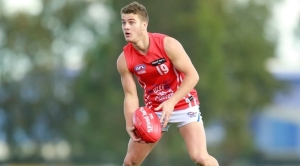 The 176cm Bunyip junior has been a revelation since being selected by the Swans with pick no.14 in last year’s Rookie Draft. He was elevated to the club’s primary list before Round 1 and has played all five games in 2016, booting eight goals and averaging 13 disposals, three marks and three tackles per game.

Papley starred as an over-age player for Gippsland in 2015, kicking 33 goals in 15 matches and averaging 16 disposals, four marks and three tackles per game during the home-and-away season. He also booted five goals in three matches as a 23rd player for the Casey Scorpions VFL team last year.

“He was fantastic in that first half, so lively and added some real bite all over the ground,” Longmire said. “He was right up and about, which was a real credit to him.

“West Coast are a good team and it was a hot game, and he was right at the forefront of it.”

Papley’s connection to the Swans extends back to the 1960s, when both his grandfathers – Max Papley and Jeff Bray – represented South Melbourne.

He said he was rapt to also play for the Swans after missing out on selection by any AFL club at the end of his draft year in 2014.

“It was a bit of a disappointment being passed over in the draft but I went to work the next day and kept positive," Papley said earlier this year.

“It’s a dream come true to play in the AFL and for the Sydney Swans.”