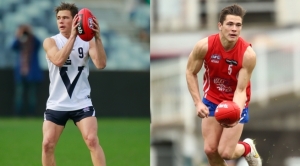 TAC Cup players who excel in their bottom-age years don’t have the luxury of playing in their draft year without the weight of expectation on them – Gippsland Power captain Ben Ainsworth is one such player.

After showing how much damage he can do as a small forward in 2015, AFL recruiters told the 18-year-old he should use 2016 to develop aspects of his game people haven’t yet seen.

The first aspect Ainsworth has sought to address is his leadership ability. The Morwell junior skippered U10, U12, U14 and U16 teams in his younger years but recruiters wanted to see him do it at the elite under-age level.

So he put his hand up for the Gippsland captaincy.

“I’ve always wanted to step up into a leadership role and take it upon myself to guide a few of the youngsters, because we have a pretty young side this year,” Ainsworth said.

“I had it in the back of my mind because a few of the recruiters wanted to see my leadership skill and mindset this year. I took it upon myself in pre-season to become a bit more vocal around the group and give indications to the young people coming in to the club.”

Ainsworth said he was naturally more of a leader by example on the field than a rousing pre-match speech-maker – “I always stutter under pressure,” he laughs.

He certainly demonstrated his ability to inspire by his actions in Round 1, tallying 22 disposals, seven tackles, seven inside-50s, six clearances and kicking 2.2 in a loss to the Dandenong Stingrays.

The AFL Academy member did so even after sustaining a cork in the area around his knee that subsequently affected his performance in one of the Academy’s recent matches against VFL opposition and kept him sidelined until Round 5 last weekend.

Fortunately, Ainsworth doesn’t expect the niggle to prevent him from representing Vic Country at the NAB AFL U18 Championships in June. He first announced himself to the football world at last year’s Championships, booting 15 goals in six games for the undefeated Country team and earning selection in the U18 All Australian forward line.

It’s fair to say Ainsworth will be more closely scrutinised in this year’s Championships than he was in 2015.

“I just went out there last year and played freely I guess,” Ainsworth said.

“I only played a few TAC Cup games early on and then had a few trial matches for Vic Country, and obviously I got in the side and made the most of it.

“There’s a great deal of expectation this year but I’m trying to ignore that, and just playing footy is my main goal. The (Gippsland) captaincy’s sort of taken it off my mind briefly but there’s still a bit of expectation you go into games with.”

The other aspect of his game recruiters are expecting Ainsworth to develop in 2016 is his ability to play through the midfield.

His performance against the Stingrays five weeks ago showed how dangerous he can be as an on-baller who also goes forward, and Ainsworth thinks he’ll perform the same role for Vic Country at the U18 Championships.

“Everyone wants to see me in the midfield,” he said.

“I know a few of the recruiters have challenged me with that and I’m looking forward to the challenge. I know I can play there, it’s just displaying it.

“I’ve taken it upon myself to get around the right people who have been there and done that. I’ve been involved with (Geelong’s) Patrick Dangerfield and (Essendon’s) Matty Stokes (through the AFL Academy program) – pretty experienced heads. I’m trying to get as much information in terms of structure and stuff like that to better my game in the midfield.”

The Academy has also worked with Port Adelaide star Robbie Gray, who the 179cm Ainsworth said was a good model for his own game based on their similar heights and Gray’s ability both in the middle and in front of goal.

While it can be difficult to escape the weight of expectation, Ainsworth can take comfort in the recent AFL Draft success stories of 2015 TAC Cup players such as Darcy Parish, Darcy Tucker and Rhys Mathieson, who starred in their bottom-age years and carried on with it as 18-year-olds.

He can also look to fellow Gippsland native and former forward-line teammate Tom Papley, who has made an instant impact for Sydney in 2016 after being selected in last year’s Rookie Draft.

Despite the Power’s winless start to the season, Ainsworth said Papley’s success gave him hope for his own prospects in football: “It’s just great to see someone from down here get the opportunity and the possibilities that are available to get up into the big league.”

By taking on the challenges of developing his leadership skills and ability to play through the midfield, Ainsworth is giving himself every chance of meeting expectations and making the big league too.