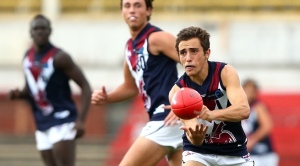 The Murray Bushrangers sit undefeated and on top of the TAC Cup ladder and will host Sandringham Dragons in Sunday’s top-of-the-table clash. Daniel Short previews Round 5 in the TAC Cup.

Coach Leon Higgins couldn’t be happier with where his side is placed and put the great start to the year down to a brilliant preseason.

Higgins credited strength and condition coach Matthew Glossop for his work over the summer which has proved the springboard to the 4-0 start.

“We are happy with the way we started; I think it was set up with a really good preseason - overseen by Matt Glossop,” Higgins said.

“That’s translated into some good performances over the first month.

“We couldn’t have been any better placed at the start of the season; we’ve got away to a good start.

“We did a lot of work through preseason on our contested ball and that movement away from the contest and I think that’s shown in the first month of the season.

“We’re looking forward to our next three games against some Metropolitan opposition.”

The Dragons may be second on the ladder but do have the advantage of an extra game under its belt which sees it at 4-1 with a strong percentage.

Nonetheless, coach Jeremy Barnard has been rapt with how the group has responded to what the coaching staff has implemented.

Barnard said the club would continue to expose plenty of its squad, given its private school boys are now unavailable, and will relish the challenge of Murray Bushrangers.

“The players are picking up what we’re teaching them regardless of who we’ve got in the side and we’re seeing good form (in) whichever player we bring in,” Barnard said.

“I’ve got to give a real pat on the back to our coaching staff ... they’ve been fantastic making sure the players are educated and well-drilled about the type of game we want.

“We’re really looking forward to it (against Murray Bushrangers).

“All our private school boys are unavailable ... so we go to our 25-40 players on the list.

“It gives them a fantastic opportunity against a well-coached and well-drilled side.”

Both clubs are coming off convincing victories, the Falcons accounted for the Northern Knights by 67 points while Eastern Ranges defeated Tassie by 81 points. This looks set to be a very even match given both sides sit at 3-1 and are quality outfits. All three of the Falcons wins have come at Simonds Stadium; this clash at Avalon Airport Oval provides a different challenge.

Gippsland Power are still without a win, but would’ve been buoyed by its final three quarters against ladder leaders Murray Bushrangers last week. They take on Calder Cannons who have also started the year at 0-4. Both clubs will be optimistic of victory this weekend.

Oakleigh Chargers has won its past four matches and continues to be strong at the business end of the match, with three of its wins by less than three goals. While Northern Territory faced a classy Sandringham Dragons outfit – going down by 73 points last round.

A 10-goal final quarter from the Geelong Flacons blew away the Northern Knights to its fourth straight loss of the season. While it was just 14 points the difference at three quarter-time, perhaps the final scoring shots differential of 34-17 tells the tale. The Knights will be searching for their first victory this week against Tassie Mariners, who went down by 81 points to Eastern Ranges.

North Ballarat Rebels brought up its first win for the season, defeating Calder Cannons by 59 points. Like the Pioneers, it has a 1-3 ledger for the season. Bendigo’s only win for the year has come against the winless Gippsland Power and it will be looking add to its one win on Sunday afternoon.

Dandenong Stingrays are one of two undefeated clubs in the TAC Cup. It held off NSW/ACT last week as Sam Fowler once again hit the scoreboard with five goals to take his tally to 16. It takes on the Western Jets who haven’t tasted victory since Round 1 and it will have its work cut out against the Stingrays.

See the full Round 5 teams below: