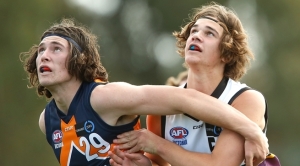 In a week of comprehensive victories, the smallest winning margin provided the biggest surprise of TAC Cup Round 6 when the Bendigo Pioneers upstaged the Eastern Ranges by 21 points.

A low-scoring opening quarter (three goals total) at Kyabram Recreational Reserve gave no indication of the goal-scoring feast to come, as the Pioneers piled on 14 majors in the second and third stanzas to set up their second triumph of 2016.

The Ranges went toe-to-toe with their opponents in front of goal before half time and held a six-point lead at the main break. For the second week in succession though, a particularly young Eastern outfit couldn’t keep up after that point as Bendigo kicked away with nine goals to one in the third quarter. The Geelong Falcons did similar damage to the Ranges last week in the second half.

The 9th-placed Pioneers now have a chance to notch their third win of the season against the 10th-placed Western Jets this weekend, while Eastern (6th, 3-3) will look to rebound against the winless Gippsland Power.

The Power was no match for the second-placed Sandringham Dragons (5-1-1) on the weekend, recording only four fewer scoring shots but losing by 49 points at Morwell Recreation Reserve.

Without suspended captain Ben Ainsworth, Gippsland was jumped by Sandringham and had conceded a match-defining 37-point lead by half time. The Dragons now have a two-week break after playing their Round 7 match against the Oakleigh Chargers in April and with a Development Weekend following the rest of Round 7 next week.

The Chargers, meanwhile, struggled to combat the wind at Eureka Stadium in a 39-point loss to the in-form North Ballarat Rebels.

After three losses to start Gerard FitzGerald’s first year as head coach, the Rebels have recorded three straight victories over the Calder Cannons, Bendigo and now last year’s premiers, and have squared their ledger at 3-3 in seventh position. Oakleigh goes into its two-week break in fifth with a record of 4-3.

The Cannons are one of the competition’s other in-form teams after inflicting the Murray Bushrangers’ first defeat of 2016 to the tune of 54 points at Rams Arena.

Calder started the season winless through four games but have hit back with big victories over Gippsland and now the Bushrangers to be sitting in eighth spot. 13 goals to five across the first and third quarters set the Cannons up in this one.

Fourth-placed Murray (4-1-1) now has to back up in a huge clash with the top-of-the-table Dandenong Stingrays. The Stingrays are the only team still undefeated following a 99-point win against the Northern Knights at Shepley Oval.

Meanwhile, Calder will also face a test against the third-placed Geelong Falcons (5-1) this week after the Falcons notched a fourth straight victory in accounting for Western by 40 points at Avalon Airport Oval.

The task is certainly ahead of the Knights and Jets – boasting just one win apiece – to break into the top eight.

CLICK HERE to read the latest AFL Victoria Record, including a story on the return to football of Calder Cannon James Peters from a shocking leg injury he suffered last year