Rams sweep Division 2 of U18 Champs 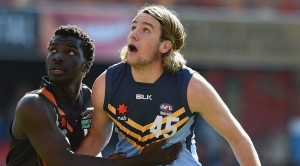 A NSW/ACT Rams team featuring a handful of TAC Cup players claimed the Division 2 title at the NAB AFL U18 Championships on Sunday.

The Rams defeated the Northern Territory 23.20 (158) to 5.9 (39) at Metricon Stadium on the Gold Coast to go through the Championships undefeated. They had previously accounted for Queensland by 47 points and Tasmania by 101 points.

The best talent from the four Division 2 teams will now be combined into an Allies team to compete in Division 1 of the Championships, which kicks off next Saturday when South Australia meets the Allies in Adelaide. Vic Country will start its campaign next Sunday in Perth against Western Australia, while Vic Metro has a first-week bye in the five-round series.

The Metro squad will warm up for Round 2 of the Championships with a three-period trial match against Werribee’s Development League team at Avalon Airport Oval on Wednesday night.

The 10 TAC Cup players who made the initial NSW/ACT Rams U18 squad are listed below:

* Photo: Murray Bushrangers ruckman Max Lynch in action for NSW/ACT against the NT