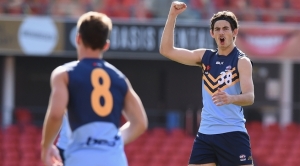 Eight TAC Cup players could potentially face off against their teammates in Division 1 of the upcoming NAB AFL U18 Championships after being named in the Allies team.

The Allies team comprises 34 of the best players from Division 2 of the U18 Championships – completed last weekend – who will come together to meet Vic Country, Vic Metro, South Australia and Western Australia in Division 1.

10 TAC Cup players were in the NSW/ACT squad that made a clean sweep of Division 2 with comprehensive victories over Tasmania, Queensland and the Northern Territory.

Following Wednesday’s announcement of the 2016 Vic Country squad, the six interstate Murray Bushrangers could now be lining up against teammates Will Brodie and Louis Pinnuck at the U18 Champs, while Kobe Mutch may find himself facing fellow Pioneers Joseph Atley, Braidon Blake, Kane Farrell, Cooper Jones, Kayle Kirby and Lochie O’Brien.

The Allies will kick off this year’s Division 1 U18 Championships against SA at Adelaide Oval on Saturday June 4, while Vic Country starts its campaign against WA in Perth on Sunday June 5. Vic Metro has a first-round bye.