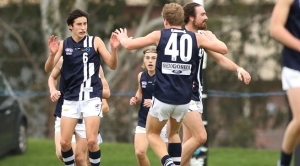 Round 8 was the last chance for clubs to chalk up a win before their top-end talent is called on to represent Vic Country or Vic Metro at the NAB AFL U18 Championships throughout June.

It was particularly important for the Dandenong Stingrays and Geelong Falcons, who clashed at Shepley Oval for top spot on the ladder. Dandenong was the TAC Cup’s top-ranked defensive team in terms of points conceded before Sunday’s match, but gave up 130 of them in a comprehensive 44-point loss to Geelong – the competition’s no.1 team for points scored.

The Falcons shocked the Stingrays from the outset, piling on five goals to none in the first quarter and never relenting. It was their sixth consecutive win following a loss to the Murray Bushrangers in Round 2, while Dandenong suffered a second straight defeat after a close loss the previous week, also to Murray.

The Bushrangers, meanwhile, overtook the Stingrays to claim second spot on the ladder with a 22-point win over the Oakleigh Chargers and set up another big clash with Geelong in Round 9.

The opening quarter proved decisive for the Bushrangers at Warrawee Park on Saturday, Murray booting three goals to one to establish a 13-point lead at the first break. That advantage would prove a welcome buffer when a torrential downpour affected play late in the match.

The Chargers are now 4-4 and only one game ahead of the Bendigo Pioneers and Western Jets in eighth and ninth – two teams that prevailed impressively in Round 8.

The Pioneers caused a minor boilover at Queen Elizabeth Oval, leading throughout to topple the Sandringham Dragons by 35 points – a team that had lost only once before Saturday’s game.

The Pioneers stunned the Dragons early, keeping their opponents goalless in the first term en route to opening up a four-goal advantage they wouldn’t relinquish.

The Jets backed up a win over the Pioneers in Round 7 with a tense two-point triumph over the Calder Cannons in tough conditions at Burbank Oval.

Western headed into the final term with a 22-point lead but saw it eroded within 11 minutes as the Cannons – who had booted only three goals before that point – slammed on four unanswered majors. Brandon Lester put the Jets back in front with a late set-shot goal and his team hung on desperately until the final siren.

The loss saw Calder fall out of the top eight and slip below Western into 10th position with a record of 2-6.

The North Ballarat Rebels continued their winning ways against the Eastern Ranges at Box Hill City Oval, claiming a fifth consecutive win by eight points, having started the season 0-3.

The Rebels are now knocking on the door of the top four after holding off a gallant Ranges outfit that fought back from a 37-point deficit during the second quarter to close to within two points late in the final term. Eastern is now 4-4, but boasts a superior percentage to any of the teams below it on the ladder.

In Round 8’s final game, the Gippsland Power finally got on the board in 2016, defeating fellow one-win team the Northern Knights by 28 points at Morwell Recreation Reserve.