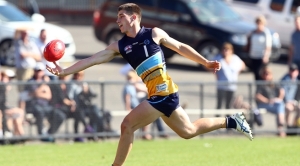 Division 1 of the NAB AFL U18 Championships kicks off this weekend, when Vic Country will begin the defence of the title it won last year in an undefeated campaign.

Joseph Atley is one of four TAC Cup club captains selected in the Vic Country squad, but the Bendigo Pioneers midfielder will be happy to simply lead by his actions at the U18 Championships.

Fellow TAC Cup skippers Jarrod Berry of the North Ballarat Rebels and Ben Ainsworth from the Gippsland Power have commanded the attention of many following stellar performances in the 2015 Championships that saw them named U18 All Australians.

Dandenong Stingrays co-captain Liam McKay has performed well under the radar this year, while Atley himself is only now emerging as the footballer he wants to be. He spent last year playing multiple positions for the Pioneers but has settled into his preferred role as a hard-nosed inside midfielder in 2016.

Without as many runs on the board as some of his contemporaries, the 17-year-old from Rochester plans to let his football do the talking over the next month.

“Last year the Pioneers started me on a half-back flank and then I played a bit of midfield later on,” Atley said. “This year I’ve been pretty much just a midfielder and pushed forward a little bit more and kicked a few goals (five in seven games), which is something I’ve tried to work on.

“(Vic Country coach) Paul Henriksen said he’ll use me pretty much as an inside midfielder. Get the ball and give it to the blokes on the outside of the contest – that’s pretty much my job.

Atley’s ability as an inside midfielder makes him a different player to his brother Shaun, who’s established himself as a skilful running defender at North Melbourne.

Joe Atley is thankful it’s difficult to directly compare him to his brother and would rather model his game on Shaun’s Kangaroos teammate Ben Cunnington, one of the AFL’s clearance kings.

Despite Shaun having experience in elite-level finals, the seemingly unflappable Joe said he wouldn’t need much advice from his brother on handling the big stages of the U18 Championships.

“Because I’ve played in the U16 Championships (in 2014), I probably know what to expect (in the U18 Championships),” Atley said. “I know it’s hard to say because it’s another step up, but you’ve kind of got an idea of what it’s going to be like.

“I don’t usually ask Shaun for much advice. He usually gets home and we like driving around in the paddock on the farm and just getting away from footy.

“He pretty much just says to enjoy your footy. You don’t play it forever, so if you’re not enjoying it, what’s the point?”

Atley should certainly enjoy getting hands dirty alongside the likes of Berry, Ainsworth and Murray Bushrangers midfielder Will Brodie, as he did at the U16 Championships in 2014.

Back then, a core group of Country players who now find themselves reunited for the U18 Championships defeated Vic Metro and lost by eight points or less to South Australia and Western Australia.

That form indicates an improved Joe Atley and his mates won’t be far off the pace again.

* Vic Country begins its U18 Championships campaign this Sunday against Western Australia at Medibank Stadium, Perth from 11am.