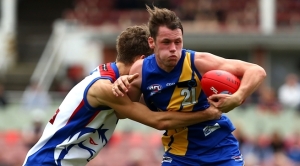 Division 1 of the NAB AFL U18 Championships kicks off for Vic Metro on Monday following a first-round bye, with the team seeking to claim its first national title since 2012.

One of its brightest prospects, Daniel Venables, comes into Vic Metro’s U18 Championships campaign feeling much healthier than he has at times over the last year.

The Western Jets mid-forward is finally logging consistent game time after a 2015 season cut short by a broken leg and then hip surgery. The 17-year-old is using the chance to show the football world how dangerous he can be, booting six goals in two games for Western as a midfielder and also impacting the scoreboard playing school football for Penleigh and Essendon Grammar (PEGS).

Venables was playing for Vic Metro as an over-ager at the AFL U16 Championships last July when he broke his leg in the last minute and a half of the team’s first game of the carnival.

“It was pretty devastating,” Venables said. “It was hard to get my head around it at the start, but I had some good people around me. I guess I just came to the realisation there’s a lot worse that could’ve happened in life.

“That ended my season right then, and I had hip surgery (for a previous condition) straight after I got out of the cast. I was out for about six and a half months and by January I was back in full training.

“I got myself a running coach and I was doing running sessions while everyone was on a break through Christmas to build up the strength in my hip. I think I’m a bit quicker now because of it.

“As I was out for so long, I feel I’m refreshed now. I’m feeling good enough to hopefully peak for the U18 Championships.”

Venables thinks Vic Metro coach David Flood will use him more in the forward line during the U18 Championships, where the hard-nosed but skilful ball user can impact the scoreboard.

“I love watching Jayden play,” Venables said. “I first played in the TAC Cup when I was 16 so I played a couple of games with him (in 2014), and he went to PEGS as well.

“He’s a little bit taller than me (Laverde is 190cm, Venables 186cm), but we play in the forward line and we can both go into the midfield as well and use our speed.

“I don’t really feel like I have a main position yet, so I’m happy to swap around and I like playing both positions. I’m a hybrid, so I can be flexible.”

Venables’ flexibility extends not just across the football field, but across sports too – he was a star junior cricketer who represented Victoria at U15 level.

Like many multi-talented youngsters, Venables eventually had to make a decision about which sport to pursue. But with Australian Football Hall of Fame member Johnny Lewis as his great-grandfather and 1960s North Melbourne player Fred Robinson as his grandfather, he said the decision to choose football was “kind of natural”.

Venables will now be hoping his performances at the U18 Championships demonstrate he made a wise decision.

* Vic Metro begins its U18 Championships campaign - supported by Dairy Australia - this Monday against Vic Country at Simonds Stadium from 12pm.