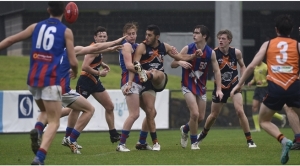 A big goal haul from Calder Cannons forward Muhammad Saad helped his team jump into the TAC Cup top eight with a thrilling nine-point triumph over the Oakleigh Chargers at Rams Arena in Round 9.

The brother of Gold Coast’s Adam Saad booted seven of Calder’s nine goals for the match, playing an integral role in the Cannons recovering from a 35-point deficit during the second quarter.

A two-goal burst from Saad put Calder in front for the first time just before three-quarter time, while another two sealed the game after the Chargers had regained the lead early in the final term with their only major of the second half.

The Cannons jumped over the Bendigo Pioneers and Western Jets – who both lost on the weekend – into eighth position with their third win of 2016, while seventh-placed Oakleigh dropped to a record of 4-5.

At the top end of the ladder, the Geelong Falcons came through a second consecutive battle for first position, grinding down the Murray Bushrangers to prevail by 14 points at Rams Arena.

Geelong has met all challenges put in front of it during a seven-game winning streak, including comprehensively knocking off the Dandenong Stingrays by 45 points away from home two weeks ago.

With players on both sides missing to Vic Country’s squad for Round 1 of the NAB AFL U18 Championships, Murray – the only team to have beaten the Falcons this season – opened up a 17-point advantage early in the third quarter. However, the fighting qualities of Geelong soon emerged, drawing to within one point at the last change and continuing on with three goals to one in the final term to secure a 14-point victory.

The Bushrangers (6-2-1) dropped to fourth after the loss, now behind second-placed Dandenong (7-2) and the third-placed Sandringham Dragons (6-2-1), who both enjoyed victories in Round 9.

The Stingrays – missing the most players of any country-based TAC Cup team to Vic Country’s U18 Championships squad – was inaccurate but did enough to defeat the Pioneers by 32 points in Echuca.

Dandenong could only manage 3.13 in the second half but retained enough control of the contest to consign Bendigo to ninth position with a record of 3-6.

The Dragons, meanwhile, dominated the Eastern Ranges throughout their clash at Box Hill City Oval to win by 43 points.

A seven-goal-to-two second quarter set up Sandringham’s victory, with Eastern’s loss opening up a two-game and percentage gap between the Ranges (4-5) in sixth and the North Ballarat Rebels (6-3) in fifth.

The Rebels had no problem accounting for the Gippsland Power by 37 points at North Port Oval, increasing their lead at every change to send the Power (1-8) back to the bottom of the ladder after notching their first win the previous week.

In Round 9’s other match, the Northern Knights climbed out of the wooden-spoon position following their loss to Gippsland in Round 8 with a 33-point victory over the Western Jets (10th position, 3-6) at Burbank Oval.