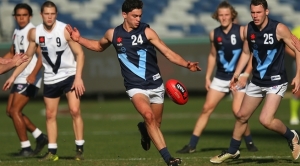 Vic Metro has prevailed in a thrilling contest against Vic Country at Simonds Stadium by two points.

Western Jet Daniel Venables kicked the sealer with less than 90 seconds on the clock, providing the fifth and final lead change of the final term, as Metro won 14.10 (94) to 14.8 (92).

Slick ball movement by Country provided them with a 22-point advantage at quarter time as North Ballarat’s Hugh McCluggage impacted the game early with two of his three goals for the game kicked in the first term.

Will Brodie (Murray Bushrangers) linked through the midfield for Country with his hard running and ability to open up play for his forwards on his way to a game high 29 disposals as Country kicked the final five goals of the term for a handy buffer.

Metro’s ability to trap the ball inside its forward half was the difference in the second quarter, with strong marking inside forward 50 a highlight from Tim Taranto (Sandringham), Taylin Duman (Oakleigh) and Karl Brown (Calder). Taranto completed a four goal run by Metro to complete the first half, giving them a three-point lead – the first time Metro were in front since Nick Larkey (Oakleigh) kicked the opening goal of the game.

Eastern Ranges pair Dylan Clarke and Jordan Gallucci led the way in the middle for Metro with 14 disposals each in the first half.

Gippsland Power’s Ben Ainsworth wrestled back the lead for Country with the first three goals of the second half, showcasing his long kicking, goal sense and strong marking with a three minute surge. For the second time in the game Country went of a five-goal run, with McCluggage adding his third and James Worpel (Geelong) his first to see Country out to a 26-point lead.

Clarke and Taranto clawed back the deficit either side of Ainsworth’s fourth, and at three quarter time Country were 20 points up.

The final term started with a flurry of goals for Vic Metro, as Taranto kicked his third and then the Eastern trio of Jordan Lynch, Clarke and Gallucci gave Metro the lead, 10 minutes into the final term. Andrew McGrath (Sandringham) had six final term disposals on his way to 23 for the game, and played on important role intercepting play in the final quarter for Metro and negating the influence of Ainsworth.

A goal-for-goal shootout ensued, as Will Drew (North Ballarat) kicked his second for a Country lead before Callum Brown (Eastern) answered at the 20 minute mark to put Metro back in front. Memories of the after the siren goal to Country’s Jye Simpkin in the 2015 Championship game were sure to have gone through the minds of both coaches as neither team could push past a six-point lead.

Poholke kicked his second with 22 minutes gone on the clock, but there was still plenty of time for Metro the way the final term had been playing out. As the time ticked into the final two minutes of the game, Venables marked strongly inside 50 to go back calmly and goal, and when Dylan Clarke extracted the ball from the centre at the ball up to find Taranto 50 metres out, time had successfully been eaten up for a two-point Metro win – its first against Country since 2013.

Despite no breeze advantage, 22 of the 28 goals scored were kicked to the end Vic Metro finished the game to.

Vic Metro face undefeated SA in Round 3 at AAMI Stadium on Saturday June 18, while Vic Country has the bye in the next round before facing SA at Etihad Stadium on Friday June 24.