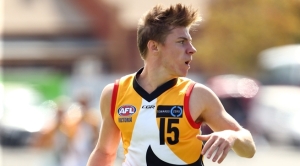 Sam Fowler has continually defied his small stature in rising from local football last year to representing the Dandenong Stingrays and now Vic Country in 2016.

The 17-year-old from Dromana stands at 169cm and weighs in at 66kg but has packed a big punch in one of the TAC Cup’s most destructive forward lines.

Fowler sat equal-second on the competition’s goalkicking table with 26 majors from eight games before being called up to Vic Country’s Round 1 NAB AFL U18 Championships team three weeks ago.

Alongside 175cm Dan Allsop (17 goals in 10 games), 198cm bottom-ager Tom De Koning (16 goals in six games) and 192cm Josh Battle (12 goals in three games), Fowler and his forward-line mates have posed plenty of problems for opposition defences in Dandenong’s 8-2 start to the season.

Fowler said he was “a little bit” surprised with how quickly he’d established himself at the elite under-age level after a stellar season playing senior football with Dromana in the Nepean league in 2015.

“I knew I could do it; I was just waiting for the opportunity,” Fowler said.

“I had an intra-club practice match with the Dandenong U16s in 2014. I played in the back pocket and didn’t really get a chance to go up forward. That was it – I got cut after that and didn’t hear from the club until November last year.

“The coach Craig Black just gave me a call and said he wanted to give me a shot at a pre-season after a good season in the seniors with Dromana. I went and did that, and then here we are.”

Fowler flourished as a small forward for Dromana, booting 36 goals in 16 senior games and only going goalless twice. He also slotted 22 majors in nine matches for the club’s premiership-winning U19 team, kicking three goals in its Grand Final victory over Rosebud.

The step up to an elite environment has been noticeable, but Fowler’s experience playing against bigger bodies has meant he’s been able to grasp his latest opportunity with both hands.

“I probably wouldn’t say my fitness was what changed over the last year,” Fowler said. “It’s never really been a strong point for me – it’s always been just good enough – and I’m probably the same sort of player.

“But I think the year in the seniors helped me develop and gave me great confidence.

“The bigger bodies didn’t really bother me that much. I think if you just stick to your strengths, every kid can be fine in senior footy.”

Fowler’s strengths – speed, competitiveness and goal sense – have stood out this year and saw him rewarded with selection in Vic Country’s team for its two games in the NAB AFL U18 Championships.

The boy nicknamed ‘Rat’ laughs that he wishes he had the size and height of superstar Fremantle big-bodied midfielder Nathan Fyfe, but his highlights package so far in 2016 doesn’t look too dissimilar to what the AFL’s premier smalls such as Eddie Betts and Brent Harvey can produce.

Bigger certainly hasn’t meant better in football this year and the little men are back in vogue. Perhaps Sam Fowler is emerging at just the right time.