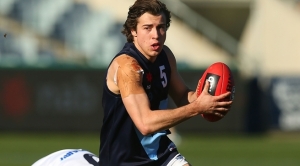 Vic Metro will be looking to continue its good start to the NAB AFL U18 Championships, when they face fellow undefeated side South Australia this Sunday in Round 3. James Szabo previews the match.

Metro defeated Vic Country in a two-point thriller on Monday, manufacturing an impressive comeback in the last quarter after trailing by 20-points at the final break, to kick six goals to two in the last quarter and ensure David Flood’s team took all four points in their opening game.

Flood said composure and adapting to a high standard of football was what helped Metro get over the line in the final quarter, but his messaging was similar right throughout the contest.

“It was a pretty similar message at quarter time,” Flood said.

“We were down by three or four goals and we probably just needed to think our way through some situations and show some composure.

“The most pleasing part was probably the guys adapting to the next level up in their footy and just sticking to the task all day.

“Vic Country have got some really elite players and our boys just responded to the challenge well.”

Some of those boys who responded to the challenge included Callum Brown, Andrew McGrathand Dylan Clarke.

Brown was dominant with 28 disposals, eight clearances and one-goal, McGrath racked up 23 touches of his own and put in an outstanding performance in the last term, while Clarke impressed with two goals, six clearances and 26 possessions.

Although the trio proved to have serious draft potential with their efforts, Flood was quick not to single out individuals.

“I don’t like to individualise - Everyone sort of chipped in at the right times and I thought there was some good performances from players who really put the team first and tried to do the right thing throughout.

“I just want to keep the team aspect of it going and not individualise too much.”

Vic Metro - supported by Dairy Australia and its Legendairy campaign - now turn its attention to South Australia – who have won both of their opening games by substantial margins. The side cruised to a 44-point win over the Allies and then Western Australia last weekend by 37.

South Australia’s last game against WA proved they are the side to beat in the Championships this year.

SA’s Jack Graham and Jonty Scharenberg continued to impress as draft prospects - with the pair collecting 34 and 29 possessions respectively.

Flood acknowledged his upcoming opponent’s talent and is looking forward to the challenge.

“They’re always a really good team – they really team well together and a lot of their boys have played a lot of senior footy.

“So that’s the challenge we’ll have this week.  We’ve got to try and team together well and do our best – Which I’m sure we’ll do.”

Flood said he’s expecting to make some changes to the side that will face SA, due to the heavy work load on players with their studies, travel and short breaks heading into games.