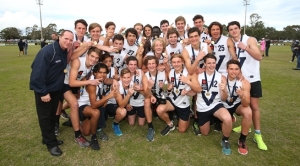 The NAB AFL U16 Championships begin for Vic Metro and Vic Country this weekend with the teams facing off at Simonds Stadium from 11.30am on Sunday.

The clash will be a curtain-raiser for the Geelong Falcons vs Oakleigh Chargers TAC Cup match.

Vic Country are the reigning Division 1 champions of the U16 Championships, having defeated WA by 99 points, Vic Metro by 19 points and SA by 10 points at the 2015 carnival. Current U18 Vic Metro squad member Jack Higgins (Oakleigh Chargers) was awarded the Kevin Sheehan Medal as the best player of Division 1.

See the Round 1 teams

See the fixture for Rounds 2 and 3 below.

See the full Vic Metro and Vic Country squads below.