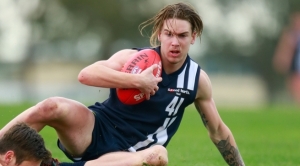 The flying Falcons forward booted 34 goals in 13 games last year, but a serious pre-season quad injury kept him out of TAC Cup action until Round 6 and restricted his performance over the following months.

Blair, 19, showed glimpses of his high-marking and goalkicking ability – including five goals in a qualifying final loss to the North Ballarat Rebels – but never truly reached his full capacity.

He was invited back to Geelong as an over-age player this year and is intent on showing the football world exactly what he can produce. Indeed, 2016 has certainly been a different story.

189cm Blair is second on the TAC Cup goalkicking table with 30 goals from 10 games for the top-of-the-ladder Falcons. He also recently achieved his pre-season goal of representing Vic Country in the NAB AFL U18 Championships.

“I never really played fully fit last year,” Blair said. “I was always struggling a bit with running. I didn’t get properly fit until we were training for the Victorian State Draft Combine after the season had finished.

“Probably going into finals, I started to gain what I thought was better fitness. My quad felt alright after I got that all sorted out, but I was just trying to get that running capacity back up and get match fitness back.

“I got invited to the State Combine and obviously had a bit of recognition from AFL clubs. I think they might have seen bits of the real me, but I definitely don’t think I properly showed everything I could possibly do.

“I think that’s why the Falcons wanted me back as a 19-year-old – to prove what I’ve got being fully fit.”

Blair said recruiters knew about his attacking qualities, but wanted to see more of a defensive side to his game in 2016. He said his efforts without the ball had led to many of his scoring opportunities this year.

“Second and third efforts, tackling, what I was doing when the ball wasn’t in my area – I think that’s what they were looking for from me this season,” Blair said.

“It’s definitely been a key focus point for me. I think they saw glimpses of what I can do as that high-marking, goalkicking forward, but I’ve been working extremely hard on the defensive side of my game.

“It’s a mindset. I find if it’s not all happening your way, if you go back to that mindset and you work hard defensively, you might lay a couple of good tackles or have a couple of good second or third efforts and you’re right back in the game.”

The South Barwon junior said his mentors at Geelong had noted his developing maturity from his top-age year in 2015. That maturity played into Blair’s selection in the Vic Country team for the first two rounds of the U18 Championships.

He was relatively quiet in Country’s losses to WA and Vic Metro with six disposals in each game and a goal against WA, but said he was playing a different role to that which he plays for the Falcons.

“I’m playing more of a high half forward role for Country,” Blair said. “At Geelong I’m that key forward inside 50 – I might have a burst up the ground but I just go back to being a key forward.

“It’s taken a bit to adjust to. At 189cm, you’re not going to be that key forward inside 50 in the AFL. That’s something I’m getting used to and still trying to develop... but I reckon I’ll get there in the end. I feel more confident up the ground now I’m fully fit and I’ve got that running capacity back.”

Blair said he’d like to base his game on AFL players such as Collingwood’s Jeremy Howe, who uses his leap to play taller than his 190cm would usually suggest, as well as emerging St Kilda forward Tim Membrey, also a similar size to Blair at 188cm but another who seems to play more as a key forward.

That’s not all those two have in common – while Membrey has become easily recognisable by his colourful sleeve of tattoos, Blair is compiling a collection of his own arm artworks.

However, it seems it’s his increased fitness and maturity that’s catching the eyes of most observers this year.