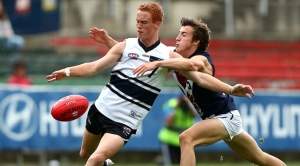 Northern Knights captain Mason Blakey seems to have an older football brain than his 17 years of age would suggest.

The running defender prides himself on setting the standard for his teammates in staying true to head coach Andrew Shakespeare’s game plan and the roles assigned to individual players within the team.

It’s therefore no surprise Blakey was invited by Northern’s Talent Manager Rhy Gieschen to sit in the coaches box for two of the club’s U17 trial matches during the mid-year school holidays.

“Rhy just thought it’d be a good learning experience for me to see what the coaches go through,” Blakey said. “I’m looking forward to seeing the view they take on the game and how they see different players within the team.

182cm Blakey’s game is built around beating his man – often one of the opposition’s best forwards – and then running off them to drive the ball forward from defence. He’s averaging almost 21 disposals per game across 12 TAC Cup matches in 2016 and said his sound decision-making and ability to read the ball in flight were his biggest footballing strengths.

And for someone who’s had to work hard on developing what he said was “a shocking kick” during his junior days at St Mary’s, Blakey’s competitiveness has proved to be another of his key traits.

In 2015, he was used primarily as a lock-down defender in 15 games for the Knights as a bottom-ager, learning his craft playing on dangerous forwards such as the Eastern Ranges’ Blake Hardwick – later drafted by Hawthorn.

Blakey’s willingness to stick to his role and do whatever’s necessary for the team saw him appointed Northern’s skipper for 2016.

“I hate nothing more than losing,” Blakey said.

“I feel like I’m always trying to do the little things for the team right, like picking up a man. I like to think I’m a leader when it comes to that.

“The best thing about TAC Cup footy is it challenges you and pushes you a bit further; you’ve got to play outside your comfort zone a bit.

“You can’t just play how you want to play – you’ve got to do the right thing for the team. The teams that win games are the teams that are really disciplined and do all the little things right.”

Blakey was asked to complete a massive task for his team while representing Vic Metro in its NAB AFL U18 Championships clash with Vic Country last month, spending significant time on dynamic Gippsland Power forward Ben Ainsworth. Metro won a thrilling match by two points, but Ainsworth booted four goals in the third quarter to shift the momentum Country’s way.

Blakey laughed that he “might have been on Ainsworth when he kicked a few of the goals”, but the experience was another valuable lesson for this student of the game.