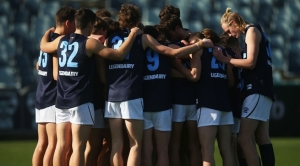 Metro will be crowned champions if they can overcome an in-form Western Australian outfit, however a loss would mean the championships would be decided on percentage – between Metro, WA and South Australia.

Metro recorded a hard fought 14-point victory against the Allies on Friday at Etihad Stadium, with Eastern Ranges’ pair Sam Hayes and Dylan Clarke leading the way with impressive performances.

Hayes, the 200cm key forward, kicked three goals and had 13 disposals, while Clarke had 26 possessions and five clearances.

Flood was happy with the result against the side he described as the toughest team they’ve faced.

“The Allies were probably the best side we’ve played so far, so we can take a fair bit from that game,” said Flood.

“They were impressive in terms of their talents and they challenged our guys – particularly after quarter time.

“It was pretty pleasing to be able to bounce back from that and the fact that ours guys absorbed their pressure and continued on to play well.”

While the final game against WA is the make or break game for the title, Flood says he’ll treat it like any other match. He also said that winning the silverware would do more for the players and their families, rather than any personal satisfaction.

“Winning tomorrow would just cap off a good year for us, but my objective is always to have a good team environment for our players.

Vic Country will also be running out on Simonds Stadium, in their final game against Metro’s last opponents.

Paul Henriksen’s side go into the clash with the Allies without a win to their name, but a number of strong individual and team performances have produced some positives from the championship.

Country finished strong in their last game, kicking five goals to nil in the final quarter of the 11-point loss to South Australia.

North Ballarat Rebels’ Hugh McCluggage was again brilliant for his country side on Friday, collecting 17 disposals and kicking three goals.

The 185cm midfielder, who is in contention as a high selection, has impressed all carnival – racking up 27 touches in his first game and 25 possessions, four clearances and three goals in his second.

Country midfielder Ben Ainsworth (Gippsland Power) was also impressive on the weekend with his 20 disposals and four inside 50’s, while James Worpel (Geelong Falcons), Jo Atley (Bendigo Pioneers), Reece Piper (Dandenong Stingrays) and William Brodie (Murray Bushrangers were all named in the best.

While Country would like to have a win next to their name after going undefeated in last year’s championships, their last two games have provided some good signs. The side went down by just two points to Vic Metro in their second game and played some impressive football to come home strong against SA in their last. Braidon Blake (Bendigo) comes into the squad for the injured Mitch McCarthy.

Wednesday’s game at 4.45pm at Simonds Stadium against the Allies will provide a great opportunity to finish off the carnival well and have some of their draft potentials put in a good performance against some familiar faces. There are eight TAC Cup players included in the Allies list, most from country regions, so TAC Cup teammates like Murray’s Todd Marshall and Will Brodie or Kobe Mutch and Jo Atley will take to the field on opposing sides for the first time this year.

The game will come after the all-important title decider between Vic Metro and WA at 2.35pm.