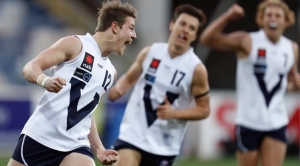 Vic Country was overrun by a number of familiar TAC Cup faces in the final round of the NAB AFL U18 Championships, unable to record its first win in 2016.

After an even first half, Country looked set to run-away with the game in the third term after Dandenong Stingray forward Josh Battle kicked three goals (four for the game) in the first eight minutes to give Country the lead.

Todd Marshall (Murrah Bushrangers) reduced it back to 21 points as the three-quarter-time siren sounded, giving the Allies hope.

The visitors restricted Country to just the one behind in the final term, kicking four of their own for victory. Country could only watch on as Kobe Mutch (28 disposals – Bendigo Pioneers), Marshall (three goals – Murray) and Zach Sproule (two goals - Murray) helped Allies hit the front 18 minutes into the final term, to hold on for four-point victory.

For Country, Will Brodie (21 disposals – Murray) was again at his ball-winning best, along with McCluggage, Korewha in defence (19 disposals – North Ballarat) and Lochy O’Brien (20 disposals – Bendigo).

McCluggage was rewarded for his impressive Championships with the Vic Country MVP. The Larke Medal – for best Division 1 players – went to South Australian Jack Graham.