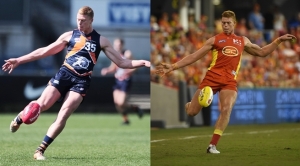 Former Calder Cannons big man Peter Wright was nominated for the NAB AFL Rising Star award for his performance in Gold Coast’s 40-point victory over St Kilda in Round 15.

Wright – affectionately known as ‘Two-metre Peter’ – is emerging as one part of a dangerous tall forward line at Gold Coast alongside Tom Lynch and Sam Day. He has kicked 14 goals in nine matches in 2016 and is averaging 11 disposals, five marks and four hitouts per game as a forward who pinch-hits in the ruck.

Suns coach Rodney Eade said Wright would only continue improving as his career goes on.

“As a club we have been pleased with Peter’s continued development and improvement,” Eade said.

“What we know is that key-position players tend take a little longer to develop. He is still only 19 years of age and will be an even better player at 23 and older.

“While he fully understands that as a second-year player there are no added expectations on him, he has set out to really maximise his opportunities and perform to the best of his ability at the top level and we are really delighted at the type of player he is becoming.”

Wright’s Rising Star nomination is the 11th for TAC Cup graduates in 15 rounds this season.