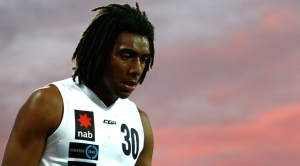 Three TAC Cup games was all it took for Murray Bushrangers key forward Esava Ratugolea to earn a call-up to the Vic Country team midway through the NAB AFL U18 Championships last month.

His rapid progression is all the more remarkable considering how late the 17-year-old of Fijian heritage came to Australian Football. In just his fourth year playing the national game, Ratugolea is a fine example of why the football world is this week celebrating Multicultural Round.

Ratugolea made TAC Cup observers sit up sharply and take notice in Round 10 when he booted eight goals in Murray’s 72-point win against the Bendigo Pioneers – just his third TAC Cup match for 2016 and fifth overall.

Five days later, he was running onto Etihad Stadium for Vic Country with some of the best under-age talent in the land. Ratugolea had less of an impact than he would have liked in losses to South Australia and then the Allies at Simonds Stadium in the final two rounds of the Championships, but said he was simply “stoked” just to be part of it.

That’s not surprising given where he’s come from.

Ratugolea’s parents were born in Fiji but settled in Sydney over 20 years ago. They moved south to Griffith, NSW where Ratugolea was born, before shifting again to Cobram – north of Shepparton just on the Victorian side of the border – when he was still young.

Ratugolea played soccer as a junior, while his family were mostly interested in rugby.

“My whole family’s grown up as a rugby family with a rugby background, so growing up I always wanted to be a rugby league superstar,” Ratugolea said. “But when I moved down to Victoria there was hardly any rugby and no one really talked about rugby at all, so I ended up playing soccer.

“I played it for about six or seven years but I started to get a little bit tired of it, so I played no sport for a year. My mates were telling me to come and have a go at footy at Yarroweyah Football Club near Cobram. I had my first year of footy in 2013 there.”

Ratugolea’s family was happy he was enjoying his new sport but needed some lessons on the intricacies of the game at first.

“When I started footy, they really had no clue of how the sport worked,” Ratugolea said.

“At the start of my footy career they were yelling out rugby terminology from the sidelines. They’d be saying: ‘Oh, knock-on!’ if someone dropped it forward, or ‘Go for a field goal’.

“It was pretty funny, but they weren’t used to it. They’re getting there now which is good.”

With no close football influences and no real knowledge that players of diverse backgrounds such as West Coast’s Nic Naitanui – also of Fijian heritage – could become stars at the elite level, Ratugolea gained inspiration from unusual sources.

“I remember back when I started they were selling Smith’s chips packets with footy cards in them,” Ratugolea said.

“I got a footy card with (former Fremantle captain) Matthew Pavlich on it. I’d look at his stats, searched him up online and that’s when I started looking at how he was playing and how good he was at the time.

There’s no denying Ratugolea attacks the ball with similar intent to Pavlich in his prime as the Dockers’ forward-line anchor, while his agility, speed and ability below his knees belies his 194cm and 95kg frame.

However, Ratugolea said his contested marking, foot skills and fitness had been works in progress during his time with the Bushrangers, and he’s still getting used to the pace of the game in general given his limited junior career.

The fact he’s even getting opportunities to develop this year has come as a surprise to Ratugolea, after a knee injury kept him out of the first seven rounds of the TAC Cup season.

“I played a practice match for Cobram in the seniors (earlier this year) and was just going to play a half and then sit out,” Ratugolea said.

“In the first 15 minutes, I jumped up and landed on my left leg really awkwardly. I felt a bit sore in there but I didn’t think much of it. I thought it was just a bruise in the bone or something and rested it for about a week or two.

“I went to go back into training again and it hurt so much more, so I got it checked and it turned out I tore the meniscus in my knee.”

It was a bitter blow for someone in their top-age year and already behind most others in terms of their football development. But in his second game back, Ratugolea bagged four majors against the Geelong Falcons and followed it up with his eight-goal haul against Bendigo.

Soon enough, he was taking a call from Vic Country’s High Performance Manager Leon Harris and gracing the turf of Etihad Stadium.

“Leon said he was going to give me a gig on the weekend to play for Vic Country and I just couldn’t believe it,” Ratugolea said. “I pretty much just burst into tears with joy, because at the start of the year I didn’t think I was going anywhere with my knee injury.

“From thinking I wasn’t going to do much in 2016 to running out at Etihad Stadium, it was just crazy. I just thought to myself about how lucky I was to be running out there and I just couldn’t believe where I was.”

* Photo: Esava Ratugolea representing Vic Country in Round 5 of the NAB AFL U18 Championships at Simonds Stadium