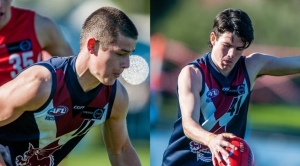 Two years after Melbourne midfielder Angus Brayshaw captained the Sandringham Dragons, his brother Hamish is continuing the family legacy as the club’s skipper for 2016.

18-year-old Hamish is also playing a role in the development of the Brayshaw clan’s youngest member, with 16-year-old Andrew recently breaking through for his first TAC Cup games.

Andrew Brayshaw – in his bottom-age year – made his TAC Cup debut as the 23rd player three rounds ago and played in Sandringham’s recent clash with the Gippsland Power under Hamish’s leadership.

Back in 2014, Hamish was too young to play under older brother Angus at the Dragons, but suspects his leadership style would be quite different to that of the no.3 pick at the 2014 NAB AFL Draft.

“I’m a different sort of person to Angus,” Hamish said.

“He was big – I think – in leading on-field by example, but generally I’m a more outgoing person than he is. I couldn’t say for certain, but I think I’d do more off-field stuff than he did.”

Hamish has had plenty of time to work on his off-field leadership in 2016, after an injury to the Lisfranc ligament in his right foot during a pre-season practice match kept him on the sidelines until Round 6 of the TAC Cup season.

Then, after playing three games for Sandringham and being picked for Vic Metro’s first match at the NAB AFL U18 Championships, Hamish had an issue with a bone spur in the same foot following Metro’s win over Vic Country.

He missed the remainder of the U18 Championships, and for someone seeking to emulate his brother in cracking the AFL ranks this year, the tough 186cm midfielder’s second injury was “a pretty tough pill to swallow”.

But his time off the field allowed him to develop in other ways.

“I think I was a lead-by-example-on-field guy, but I had to work on that other aspect of leadership – the off-field communication – when I wasn’t playing,” Hamish said. “I think the time off really allowed me to build that side of my leadership, so there’s been some good to be taken out of it.

“I tried to get to every Dragons game while I was injured and I was sitting on the bench and speaking to the guys on the field so I could still try to be of help. I was showing my face around the club and at training too.

“It was a bit difficult, but having two good vice-captains in Corey Lyons and Liam Murphy really helped.”

Hamish picked up the reins again in Andrew’s second TAC Cup game three weeks ago, making a statement upon his return with 23 disposals and four goals as Sandringham defeated Gippsland Power by 26 points. He backed it up with 30 disposals and one major against the Dandenong Stingrays last week.

The older Brayshaw’s disposal by foot and clean hands in close have drawn comparisons to brother Angus, while 182cm Andrew’s speed and football smarts were on show against the Power as he chipped in with two goals of his own.

Andrew said having Hamish at the helm of the team made him feel more comfortable on the field.

“It brought back a few good memories from when we played together at school (Haileybury College) last year,” Andrew said. “Back then, if he or I got the ball, there’d always be a sneaky option out the back just to help each other out.

“The first TAC Cup game I played when he wasn’t there, I was a little bit more nervous. Having him come into the team just gave me more confidence that if I did do some things wrong, with him being the captain, he’d come over and I’d understand what he’s got to say.

“I remember in the first quarter I dropped a mark and he came up to me and told me to just keep a cool head, and I thought after his message I really picked up. It was good to get that little personal message from him.”

However, Hamish said Andrew likely wouldn’t need much extra guidance as he seeks to establish himself in the strong second-placed Dragons line-up in the run to finals.

“I’m not seeing him as my brother and that I’m there to lead him along, I’m just sort of looking at him as another player,” Hamish said.

“Despite what he might tell you, Andrew does have a few leadership qualities, so he’s a pretty good leader in his own right. There’s not a lot I need to whip him in line for.”

As for whether the Brayshaw captaincy dynasty will continue at Sandringham in 2017, Andrew said his hat would be in the ring but that he might offer something a bit different to Hamish.

“Hamish loves to say a lot, I’ve noticed,” Andrew laughs. “A lot of the time he doesn’t even need to say anything, he just does it because he’s the captain – and when he does say something, he loves to say ‘boys’ – ‘yeah boys’, ‘bring it in boys’ and so on.

“I’ll definitely put my hand up to be a leader next year. It depends on whether people think I should be the captain or not, but I wouldn’t mind stepping up for a leadership role.

“I don’t say as much as Hamish does but when I do say something, I’d like to think it’s pretty important.”