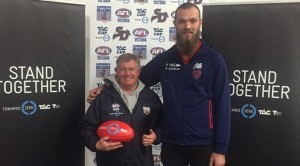 Penn was one of the first staff members at the club 25 years ago, and has been with the Dragons ever since.

He has involved his whole family at the club over the years, and was one for the first club life members.

Penn was honoured by former TAC Cup player, Melbourne’s Max Gawn, who returned to his U18 club for a Towards Zero Player Night.

Gawn is one of many top AFL players who have come through the TAC Cup, a partnership that builds leadership skills, including being a safe road user, as young people get a kick-start to their football and driving careers.

TAC CEO Joe Calafiore said the return of role models like Gawn, who is one of the premier ruckmen in the AFL, reinforced how TAC Cup players have the opportunity to show leadership on and off the field.