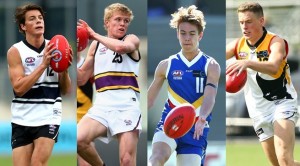 The TAC Cup has produced 43 of the 80 players invited to the 2016 NAB AFL Draft Combine, which will be conducted at Etihad Stadium from Thursday October 6 to Sunday October 9.

23 players are from Country TAC Cup clubs and 20 from Metro clubs, with six of the 43 TAC Cup players originating from NSW/ACT.

See the full list of TAC Cup invitees below.

Players had to be nominated by at least five AFL clubs in order to be invited to the Combine, which tests the athletic traits and football skills of attendees as well as assessing their personality and character.

“The Draft Combine is the final chance many clubs will have to see prospective players up close,” Sheehan said. “Clubs will not only watch the testing but will conduct interviews with players as they count down to the 2016 NAB AFL Draft in Sydney.”

Additional TAC Cup players will be invited to test at the Victorian State Combine following the National Combine.