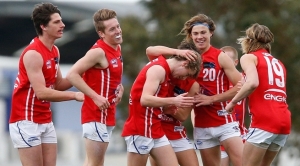 The Oakleigh Chargers have all but shut the door on the teams chasing their finals spot with a gutsy come-from-behind victory over the Northern Knights in Round 15.

Oakleigh (8th, 6-9) is now two games and percentage clear of the Gippsland Power, Bendigo Pioneers and Western Jets with two rounds to play, although the Chargers must still face top-four teams the Sandringham Dragons and Murray Bushrangers following this week’s Development Weekend.

Nick Larkey was a hero late in the game against the Knights (12th, 3-12), booting three of Oakleigh’s five fourth-quarter goals as the Chargers rallied from seven points down at the last change to prevail by six points at Preston City Oval. Josh Daicos and Lachlan Walker also chipped in with majors in the final stanza, while Jack Higgins was a stand-out throughout with 34 disposals and three goals.

Meanwhile, the Eastern Ranges (7th, 6-9) have essentially booked their finals spot on account of their strong percentage, despite losing to the Geelong Falcons (2nd, 12-3) by seven points in a thriller.

Geelong’s win was its first at Box Hill City Oval since 2004 and just about assures it a top-four finish. The Falcons recovered from a 10-point deficit at half time to eventually pull away with goals to Gryan Miers and Lachlan Noble midway through the final quarter. Max Augerinos (18 disposals, two goals) was their best player, while bottom-ager Jaidyn Stephenson shone with five goals for Eastern in defeat.

The Murray Bushrangers (3rd, 11-3-1) moved a game clear of the Sandringham Dragons (4th, 10-4-1) on the ladder with a see-sawing 17-point victory in windy conditions at Rams Arena.

The Dragons kept the Bushrangers scoreless in the opening quarter to lead by 34 points at the first break, but couldn’t repeat the dose while kicking with the breeze in the third term, managing only one goal. A 19-point advantage at the last change wasn’t enough, with Murray booting seven majors to one in the final stanza on the back of stellar performances in front of goal from Todd Marshall and James Cousins (three goals each).

Sandringham’s loss saw the North Ballarat Rebels (5th, 10-5) sneak to within half a game of a top-four finish after defeating the Bendigo Pioneers (10th, 4-11) by 58 points at Queen Elizabeth Oval.

- The Dandenong Stingrays (1st, 12-3) claimed top spot on the ladder with a percentage-boosting 62-point win against the Western Jets (11th, 4-11) at Shepley Oval.

CLICK HERE to read the latest edition of the AFL Victoria Record, including a story on the six Bendigo Pioneers players making the journey from Geelong to play in the club's home games