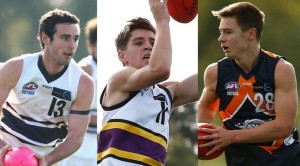 The State Combine will take place at Etihad Stadium on Sunday October 9 after the four-day national Combine has concluded. Attendees will be tested for their athletic traits and football skills as well as having their personality and character assessed, but on a lesser scale than for those attending the national Combine.

Players invited to the State Combine have had interest shown in them by AFL clubs, but weren’t nominated by the minimum five clubs required to be invited to the national Combine.