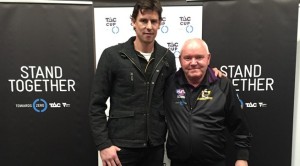 The latest TAC Cup Legend has been recognised, with Murray Bushrangers​ trainer Rob Ryan acknowledged for his service to the club.

Involved with the Bushrangers for over 21 years, Ryan is a qualified nurse and a dedicated volunteer who often goes above and beyond in his care of the players both on and off the field.

Ryan’s involvement over the years has gone beyond just the Under 18 program at Murray, having played a role within AFL Victoria’s Vic Country Academy, the AFL Academy and various other Murray Bushranger squads.

Ryan was acknowledged by former Bushranger and St Kilda Football Club​ player Justin Koschitzke, who made the presentation at a Towards Zero Player Night at the Murray Bushrangers.

Koschitzke is just one of over 120 draftees from the region since the clubs inception into the competition in 1993, with the competition not only developing elite footballers but safer road users, as young players get a kick-start to their football and driving careers.