TAC Cup players you should know more about 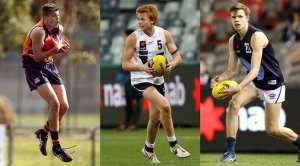 With the TAC Cup home-and-away season drawing to a close, 2016 NAB AFL Draft hopefuls have now had time to show the football world what they can do. But taccup.com.au takes a look at a group of TAC Cup draft hopefuls you may not have heard much about yet.

Leon Harris says: “Two years ago, Kayle trialled for the Vic Country squad for the U16 Championships. He didn’t cut the pace at that stage, but over the course of the last two years he’s worked harder and dropped weight. He plays predominantly as a forward. He tested to be in the top three TAC Cup players in the 20m repeat sprints, so his power is very good. He’s quite freakish at times and as good a kick as I’ve seen come through the TAC Cup. Fitness level is not great but his speed is exceptional. A talented player, but coming from a long way back.”

Anton Grbac says: “Mitch should’ve played for Vic Metro, but he needed to develop a physical side as a key forward. When we did delist him from the Metro squad, he looked at me and said: ‘I’m happy to prove you wrong.’ He’s got that sort of determination and grit, and it’s pleasing to see some of his TAC Cup performances since. There’s some real urgency, some real desperation in his game that wasn’t there before. He didn’t get an invite to a combine because AFL clubs are still not convinced he’s got the physical presence that he needs, but he can play.”

Leon Harris says: “Mitch played in our Futures (U17) game two years ago, but he went over to America last year to follow a passion with basketball. He came into Dandenong’s program as a 19-year-old this year. He’s a gifted athletic player who’s got a very good leap. He’s probably not going to be tall enough to be a ruckman at the top level, so the plan was to start playing him in more of a key-position but he copped a foot injury and is missing the second half of the year. We played him for Vic Country in a couple of games this year, but he’s raw. He has raw ability though, there’s no doubting that.”

Anton Grbac says: “Josh is a really good story. He came out of local footy this year. His talent was obvious when I saw his first game against Tasmania (six goals in Round 4). Now he’s playing in the midfield and he’s lost a lot of weight, so the kid’s prepared to work, but he probably started playing well a bit too late for Vic Metro consideration. I watched him again recently playing through the midfield and he was really exciting. He’s like a really strong, powerful Christian Petracca-type of midfielder, but as a forward, he’s also really clever with good hands and a beautiful kick.”

Leon Harris says: “Sean played Vic Country U16s as a ruckman. He’s been restricted in pre-seasons the last couple of years with back and hamstring issues, but is a big solid ruckman. He played for Country this year – he was overlooked in game one, played an outstanding TAC Cup game to gain selection and was a very good player. He’s got top-end talent, but he’s just got to lose about 10kg. Does he become a Shane Mumford-type? That’s what we’re hoping. His rucking ability is probably as good as I’ve seen come through Country, it’s just getting from contest to contest.”

Leon Harris says: “Will’s the brother of Jack Leslie, who’s on Gold Coast’s list. He’s a different player – a midfield/half back-type (Jack is a key-position player). He predominantly started in defence but has been pushed more into the midfield recently. He’s got raw ability, and is exciting at times but frustrating at times. He just needs to work harder but is a real talented player. I think once he realises his ability and his potential, it’ll click. He played in the U18 Championships for Vic Country this year, but he just needs to have the realisation that he could be a very good player.”

Leon Harris says: “Harry is a talented player who’s been frustrated by injuries in his last three years. He’s a half back flanker/winger/half forward who makes good decisions and uses the ball well. As a 16-year-old, he did an ACL in a Vic Country trial, which meant he didn’t get back to playing until the latter part of last year. This year he missed the U18 Championships because of a bulging disc in his back, but he’s back up and going now. He just needs to get a good go at it. I think everyone rates him and knows the question mark has been his body.”

Leon Harris says: “Willem didn’t play for Vic Country at U16 level but he played games last year at North Ballarat. His early form this year was fantastic as a midfielder. He’s had a consistent year – he played for Country at the U18 Championships, was just an honest, very good player and has been invited to the national Draft Combine. He’s a great kid, and was over the moon when he was selected. He’s a cousin of Adrian Gleeson from the Koroit region, and has moved into Ballarat to study and finish his schooling.”

Anton Grbac says: “Luke was one of our most valuable players in the U18 Championships but because he doesn’t look like he runs fast, people aren’t excited about him. He was one of our best midfielders at Vic Metro and he won our Coaches Award – in a year when you’ve got a stellar group of kids and you’ve won the nationals, the coach thought he was our best player. With these sorts of kids, you don’t walk away thinking much of them but you’ve got to watch the tape. No one gave Tom Liberatore credit in his 18th year until you watched his tape and saw how powerful he was at stoppages.”

Anton Grbac says: “Jordan’s your prototypical hybrid forward/back; he’s suited for the athleticism of the modern game. His break-out game with Vic Metro (18 disposals and seven marks against the Allies) while playing in defence was one out of the box. He let all his inhibitions go and just played a really good game. He’s getting used to playing on the half-back line because he was playing half-forward last year. He found it a little bit difficult playing forward early doors, but when he was moved to a half-back flank this year, he’s been able to show a different side of his footy.”

Anton Grbac says: “Lachie was an anchor for Vic Metro at the U18 Championships. He was our main ruckman and did all the dirty, gritty stuff than Brodie Grundy did for SA when he played. He could knock on 200 or 202cm and I think he’ll come on in waves. I wouldn’t be surprised if an AFL club takes him as a rookie. He hasn’t played footy for long as he’s come from an elite soccer background. He just gets better and better, and has that ability to learn very quickly and apply it. A very intelligent young man and a really impressive human being.”

Anton Grbac says: “Judah’s had an interrupted year because of foot and leg injuries, but he’s a player who’s highly regarded. He’ll pop up at the national Draft Combine and people will want to know: ‘Who is this kid?’ He’s rangey, has a beautiful left foot and reads the game well – he’s a half back-type/utility. His first real crack at it was as a 17-year-old and he made a huge impact, but he’s improved the aggressive side of his game this year. He’d been playing fairly much a cautious, sit-back-behind-the-ball, intercept-marking role, but he’s become better at the defensive and physical elements of the game.”