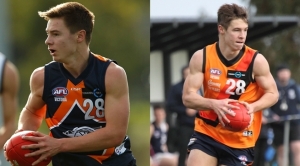 Ben Ronke hasn’t followed a traditional path towards finding himself in NAB AFL Draft contention. But since the speedster finally secured a spot on the Calder Cannons list as an over-age player this year, his prospects have taken off.

Ronke, who turns 19 in December, had previously been part of Cannons development programs but never made the club’s primary list. Not to be deterred, he continued playing in the VAFA at St Bernard’s where he was part of an U19 premiership in 2014 and the Snowdogs’ 2015 Premier Division flag triumph.

In 2016 though, 181cm Ronke has shone with his pace through Calder’s midfield, played two games for Coburg’s senior team in the VFL and scored an invite to October’s Victorian State Combine.

He said much had changed personally since the Cannons first saw him several years ago.

“I guess back then I wasn’t playing as confidently as I have been lately and I just didn’t really have the dedication towards footy that I’ve had in the last three years,” Ronke said.

“That feeling when I was expecting to get an invite to do a pre-season at Calder and not getting it – I suppose there’s a few ways you can take it and I just tried to take it as a learning curve. It motivated me to prove people wrong and so I did as much work as I could off the field – diet-wise and fitness-wise – to get myself to where I wanted to be.

“I was planning on doing a pre-season with Footscray’s VFL team (late last year) and then (Cannons Talent Manager) Ian Kyte got in contact and told me to come down for a pre-season there. He said they’d watched a little bit of my footy and saw I was playing alright at the senior level.”

Last year, Ronke established himself in a St Bernard’s senior team coached by former AFL 200-gamer Anthony Rock as a 17-year-old mid-forward. He described the thrilling eight-point premiership victory over Old Trinity as “the greatest thing” he’s experienced, appreciating how lucky he was to be involved alongside a senior core that had put in years of work to achieve glory.

The physicality at senior level prepared Ronke well for a midfield role at Calder, where he’s averaging 20 disposals, four tackles and over a goal per game across 14 matches in 2016.

But the generally quicker nature of TAC Cup football has better suited the strengths of someone who recorded the fastest 20m sprint time at the TAC Cup fitness testing day earlier this year.

“The physical side of playing seniors last year has helped me, but I’ve noticed the speed in the TAC Cup has definitely lifted,” Ronke said. “Naturally I’ve had a bit of speed as I’ve grown up, so I’ve been able to adjust to that pace quicker than I thought I would.

“That speed, my physicality around the contest and my desire to win are my biggest strengths I guess. I probably just need to improve on my composure at times; I’ve done a bit of work on my kicking at the end of runs.”

Those tearing runs have been a fairly common sight in Ronke’s appearances for the Cannons and Coburg. But he also averaged 16 disposals and four tackles while kicking three goals in his two games with the Lions to show he hadn’t lost the physicality required to perform at senior level.

Indeed, that combination of explosive speed and strength is a rare one, and Ronke will be hard to stop now he’s finally found the fast lane of football development.

Calder's James Peters' pain now in the past