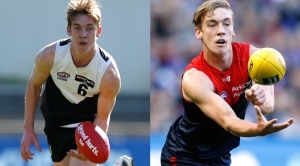 The 20-year-old had 23 disposals at 74 per cent efficiency, nine marks and five rebound-50s against the Power.

McDonald was selected by the Demons with pick no.53 in the 2014 NAB AFL Draft following a season in which he won the TAC Cup Coaches Award and North Ballarat’s best and fairest, and was named in the TAC Cup Team of the Year.

The younger brother of Melbourne teammate Tom McDonald, Oscar made his AFL debut in Round 22 last year and played the final two games of the home-and-away season. He has played 13 matches in 2016 – including the last 12 – and averaged 16 disposals and four marks per game.

Oscar’s achievement mirrors Tom’s Rising Star nomination in 2012, with Tom also a key defender who was drafted with pick no.53 (in 2010). Oscar is the fourth TAC Cup graduate from Melbourne to be nominated for the Rising Star this year (along with Clayton Oliver, James Harmes and Christian Petracca) and the 15th TAC Cup graduate out of 21 nominations overall.

“Oscar has been working really hard at his craft and this award is a great recognition of his effort,” Roos said. “We’ve got a very young backline and his development as a player has been a crucial cog in our progression as a team.”