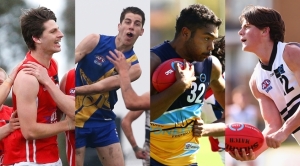 With the bottom four TAC Cup teams playing off on a standalone weekend of games before the finals begin, taccup.com.au talks to each club’s Talent Manager about the season that was.

Season assessment: “We’ve been quite happy with the year in that we’ve got a reasonably young squad and a lot of U17 players played each week. Obviously the win-loss record might not look great, but we feel like the group’s just kept improving from week to week. The results sort of show that – later in the year, we’ve won some games and had a lot of close games.”

Season highlight: “Probably the win against Geelong. It was a really wet, cold day at Morwell – we even had a little bit of snow earlier in the day. We were the bottom side that day and they were the top side, and to beat them was really great for the boys and their confidence. They’d been really building towards that.”

Surprise packet: “We brought Josh Patullo (pictured, left) back as a 19-year-old and we think he’s had a magnificent year. He was on the radar but had a bit of injury last year and AFL clubs said they really wanted to see him play in key-positions, back and forward. He did that and did it really well.”

2017 prospects: “We’ve got a group of small players – Will Stephenson, Callan McKeon and Nick Hogan – who have been excellent. Aidan Quigley’s had an interrupted year but has performed really well lately. Callum Porter’s another one who’s been fantastic through the midfield.”

Season assessment: “When we started off we were certainly aiming to play finals. I suppose we had some opportunities in the closer games we’ve had and couldn’t get it done, but I’d also say we’ve had a horrendous run with injuries – it was only a few weeks ago we had 23 kids to pick from. When we had a relatively full list, the first game of the year was a terrific win against Oakleigh and they were full-strength, and two weeks ago we defeated Bendigo with the best team we had available since then.”

Season highlight: “The highlight would be Daniel Venables, Brodie Romensky, Oscar Junker, Wilson Berry and Brock McGregor playing for Vic Metro. We hope we’ll get some boys drafted, and at the end of the day that’s what it’s about – providing that opportunity for kids to meet their full potential and go on to bigger and better things.”

Surprise packet: “Bottom-ager Tristan Xerri (pictured, second from left) is big key forward/ruck-type player who’s had a really good season (13 goals in 11 games). He wasn’t in our original squad and came in a little bit later.”

2017 prospects: “Luke Hitch and Nick Stuhldreier have been exceptional this year. Lachie Fogarty has only played a handful of games and Cam Rayner’s another one – both were only available at the start and end of the year. Rayner kicked seven goals in the Round 16 win against Bendigo and five last week against Calder.”

Season assessment: “We’ve made a lot of positive changes to the program. By last week we’d played possibly 33 bottom-age players for the season – opposed to last year when we only had 12 bottom-age players on our list. We extended our list from 50 to 70, so we’ve put development into another 20 kids. We’ve become more competitive too; we’ve won four games and have been in five other games that were decided by four goals or under.”

Season highlights: “I think the fact we had seven boys play at the U18 Championships, and getting back to play our home games at Queen Elizabeth Oval this year have been real positives for us. Also, I don’t think we’d beaten Oakleigh for quite a few years, and it might have been six to eight years since we’d beaten Gippsland and Sandringham.”

Surprise packet: “Fergus Greene has played four games for us, but he hasn’t managed to string many together because he’s been injured or crook. He played two weeks ago and had a break-out first half (eight disposals, four marks, two goals) before he was hurt again. He’s pretty slight but he played a terrific game. He’s come under the eye a bit.”

2017 prospects: “We’re well positioned to be competitive next year. AFL Academy players include Jarrod Brander, Lochie O’Brien and Kane Farrell. We also have players like Paddy Dow, Angus Schumacher, Tom Campbell and Darby Henderson. We have greater depth in our bottom-age year than we did the year before.”

Season assessment: “I think we didn’t start the year the way we wanted to on the field, but we were really led by some of our top-age players who started the year quite well. To the playing group’s credit they’ve stuck at it all year and continued to improve, and I guess the disappointing thing is we haven’t translated that into winning on the scoreboard.”

Season highlight: “We had a really memorable win against the Western Jets in Round 9. We went there with all of our private school players unavailable and came away with a win in the wet, and that was all due to endeavour and effort and players buying into the game plan. They deserved to win and they got one that day.”

Surprise packet: “We probably unearthed Patrick Lipinski (pictured, right) that day against Western, when he played in the midfield and had 30 touches. He wasn’t on our list until this year as he’s come from a basketball background.”

2017 prospects: “We’ve been really pleased with the performances of our bottom-age group. Patrick Naish is one we’re really excited about working with next year. Nick Coffield has had a really strong year and Ethan Penrith is an indigenous player who’s really improved his footy out of sight. We’ve recently added Jack Petruccelle to our squad and he’s probably the most exciting player on our list. He’s an AIS basketball player who’s turned his focus to footy and has been extremely exciting in two games with us.”