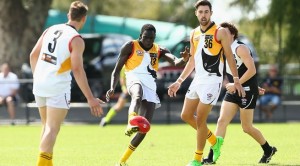 The 2016 TAC Cup Finals Series will begin on Saturday September 3, with the Week 1 Qualifying and Elimination Finals times and venues now confirmed.

Finals will be played at Box Hill City Oval (Saturday, September 3) and IKON Park (Sunday September 4), with double-header games fixtured for both days.

An array of stars from Vic Metro and Vic Country’s NAB AFL U18 Championship campaigns will be on show, with the country regions filling the top four ladder positions; all earning a double chance.

The TAC Cup Finals Series will continue at IKON Park on Sunday September 11 (Semi Finals) and Saturday September 17 (Preliminary Finals) before the Grand Final is played at Etihad Stadium on Sunday September 25, as part of a double-header with the Peter Jackson VFL decider. Entry to the first three weeks of the TAC Cup finals is free, with TAC Cup Radio to cover all matches.

Oakleigh Chargers vs Calder Cannons, 11.30am

Sandringham Dragons vs Eastern Ranges, 11.30am