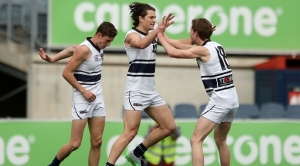 The Northern Knights and Gippsland Power won the two games played between the bottom four TAC Cup teams at IKON Park on Saturday.

Northern broke away to a 22-point lead at quarter time before the Jets rallied to draw level by the main break. The Knights were inaccurate in front of goal throughout the contest – recording nine more scoring shots – but managed to hold off their opponents. Jamison Shea provided plenty of drive for the victors with 31 disposals and seven inside-50s, while Matt Perry racked up a game-high 42 disposals.