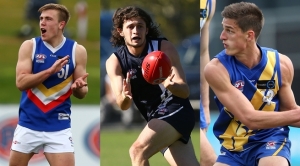 taccup.com.au looks at 25 of the top chances to take out the prestigious Morrish Medal for the TAC Cup’s best and fairest player of the 2016 home-and-away season this Sunday night.

TOM GLEN (Dandenong Stingrays)
19-year-old from Beaconsfield who was in draft contention in 2015 but returned to the TAC Cup and averaged 22 disposals in 15 games.

JOSH PATULLO (Gippsland Power)
198cm over-age player from Warragul capable of playing in the ruck or key-position at either end, averaging 15 disposals, five marks and 11 hitouts in 15 games.

JAMES COUSINS (Murray Bushrangers)
Midfielder from Mansfield who averaged 24 disposals and four tackles as well as kicking 11 goals in 15 games.

MASON BLAKEY (Northern Knights)
Reliable defender from Eltham capable of rebounding and lock-down roles who captained the Knights and averaged 21 disposals in 15 games.

GOY LOK (Sandringham Dragons)
19-year-old from Mazenod Old Collegians who was in draft contention in 2015 but returned to the TAC Cup and averaged 20 disposals and four tackles in 12 games.