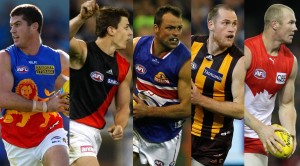 With the announcement of the TAC Cup Top 25 players this Sunday night, we take a look at some of the superstar goalkickers who could potentially top the list. James Szabo reports.

Every great team needs star forwards to kick their goals and the TAC Cup has produced some top-class talent throughout the years.

Coleman Medal winners Matthew Lloyd from Essendon, Hawthorn’s Jarryd Roughhead and former Brisbane superstar Jonathan Brown have all been products of the TAC Cup. As has big bad Barry Hall, who’s outstanding goal kicking record puts him well and truly in the mix.

But who is the best of the lot?

Lloyd, who was drafted back in 1995 from the Western Jets, has an impressive record that puts him well in contention.

The 38-year-old won the Coleman Medal three times in his 270-game career and made the All Australian side five times. Lloyd also won a Premiership in 2000 and captained his side from 2006 to 2009.

The 192-centimetre Essendon champion kicked 926 goals in his career and boasts the record of the all-time leading goal kicker for the Bombers.

Lloyd’s strong marking ability and top-class accuracy, makes him a big chance at being named one of best.

Jarryd Roughead’s magnificent achievements also put forward a good argument to why he should be named one of the all-time great forwards from the TAC Cup.

The 193-centemetre forward from Gippsland Power kicked 68 goals in his Coleman-winning season and went on to kick another four in the final series of that year – the same year Roughead won his second Premiership medal.

The 29-year-old sharpshooter has kicked 491 goals in his career and has won Hawthorn’s leading goal kicker award twice.

Roughead’s ability to be dominant as a forward and also make an impact through the midfield, has made him a contender to finish towards the top of best 25 TAC Cup players of all time.

Jonathan Brown is also another champion forward sure to be named amongst the greatest of all time, after his impressive 256-game career.

Brown has been named All Australian twice, named captain of the Lions for four consecutive seasons, won three club best and fairest awards, three premierships and the Coleman Medal in 2007.

The boy drafted from Geelong Falcons in 1999 kicked 77 goals in his Coleman-winning season, in a side which finished tenth on the ladder.

Brown’s courageous acts, strength in contents and ability to convert under pressure, will surely see him come up towards the top of the pack as one of the all-time best goal kickers the TAC Cup has ever produced.

While Barry Hall hasn’t won a Coleman Medal, his outstanding achievements make him one of the greatest forwards the TAC Cup has ever produced.

Goals followed Bazza at every club he played at throughout his 289-game career. The intimidating forward kicked 144 goals at St Kilda, 467 at Sydney and 135 in two seasons at the Western Bulldogs.

As well as that highly regarded achievement, the boy drafted from the Murray Bushrangers in 1995 has also been a Premiership captain, made the All-Australian team three times, won a club best and fairest in 2004 and topped the season goal kicking tally at every club he’s been to.

Hall’s leadership qualities, strength and dominance in contests, as well as his impressive goal kicking abilities, has made him one of the most influential forwards the fans have ever seen.

His attributes, along with his records, surely make him a favourite to finish well near the top of the best ever 25 players to come out of the TAC Cup.

Brad Johnson didn’t have the size of his fellow forwards on the list, but that did not stop him kicking 558 goals in his 364 game career at the Western Bulldogs.

Other club leading goal kickers from the Top 25: