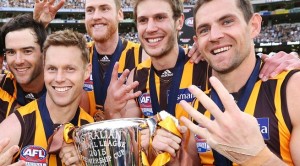 With the ranking of the TAC Cup Top 25 players to take place tonight – Sunday September 4 - discussion and excitement continues to build.

James Szabo looks at the list of Premiership captains featured in the Top 25, including Barry Hall, Sam Mitchell, Chris Judd, Luke Hodge and Cameron Ling, who have all led their team to Premiership glory.

But who is the best of the lot?

CLICK HERE to see the goalkickers from the Top 25

CLICK HERE to see the Brownlow Medal winners from the Top 25.

Big bad Barry Hall was a massive influence on and off the field for his teammates. The tough forward was the first player in the history of the game to kick 100 goals for three separate clubs and his impressive feats will surely rank him highly.

Hall led from the front as captain and his outstanding records speak for themselves.

Three All Australian selections, 11 club goal kicking awards, a club Best and Fairest, a Premiership and 746 goals in 289 games.

Bazz’s leadership qualities and influence on and off the field earned him captaincy of the Swans in 2005, where he won the Premiership in his first year in charge.

The boy drafted from the Murray Bushrangers in 1997 kicked 80 goals that season and made a big impact in his side’s finals campaign.

Hall kicked eight goals in three final’s matches, including two in the Grand Final – as he led his side to nail-biting four-point Premiership win.

Barry Hall’s presence on the field, as well as his contested marking and consistent scoreboard influence throughout his career, will make remembered as one of the greatest Premiership captains the TAC Cup has ever produced.

Sam Mitchell’s accomplishments will also put him well and truly in the mix, with his 304-game career producing some of the best records we’ve seen.

Mitchell’s list of achievements include four club Best and Fairest awards, three All Australian selections, being named captain of his club for three consecutive years, 204 Brownlow votes and four premierships – the equal most by any player in the top 25 list.

The 179-centimetre midfielder from Eastern Ranges was drafted to Hawthorn in 2001 and continued to improve as a key player since his debut season.

Mitchell was named captain in 2008, where he led Hawthorn to their first premiership in 17 years.

The captain’s Premiership winning season was one of his most memorable, producing the third most disposals is the league with 667, 133 clearances, 88 tackles and racking at least 25 disposals in 19 games throughout the season.

Since winning the Premiership in 2008 over Geelong by 26 points, Mitchell has gone from strength to strength.

Instead of slowing down with age, the robust rover continued to prove his class by winning the best and fairest in 2009, 2011 and 2012 – where he also finished second in the Brownlow medal, made the All Australian side in 2011, 2013 and 2015, won three more Premierships and produced possibly his best ever season in 2015 at the age of 32.

Last year he led the league with the most disposals at 748 and the highest average of possessions a game with 31.2. Mitchell also registered 134 clearances and finished in third-place for the Brownlow Medal.

Sam Mitchell’s smooth, silky skills and top class reading of the game makes him one of the best midfielders the TAC Cup has ever produced. His ability to get better with age and lead his side by example has made him one of the favourites to make it towards the top of prestigious list of 25 players.

Another Premiership captain to come out of the 2001 AFL draft was 279-game legend Chris Judd.

Juddy was an influential leader at both West Coast and Carlton, however arguably made the biggest impact at the Eagles, where he captained his side to a historic 2006 Premiership.

Five club best and fairest awards, six All Australian selections, a Norm Smith Medal, a premiership, two Brownlow Medals and being named captain of his side for seven seasons are some of the long list of impressive achievements next to the champion’s name.

Judd won the Premiership in his first year in charge as captain, which further highlights the midfielder’s influence.

The 2006 Premiership-winning season was a special year for the Sandringham Dragons product, taking over as captain from Ben Cousins and winning his second club Best and Fairest award, second All Australian selection and first ever Premiership medal in the one-point win over Sydney.

He also recorded 20 or more disposals in 21 of his 23 games that year, kicked 29 goals from midfield and had an impressive finals series – racking up 34,26,29 and 28 possessions in those four games.

Judd’s leadership qualities were further displayed when he made the move to Carlton in 2008 and led the side to three finals campaigns. He also strengthened his record by making the All Australian team four times in that period at Carlton, being awarded the Best and Fairest three times and winning his second Brownlow Medal.

Chris Judd is considered the ultimate leader, making an impact everywhere he goes. Judd’s character on and off the field inspired the players around him and his relentless attitude and football smarts makes him on the best we’ve ever seen.

Judd is sure to be ranked highly.

Luke Hodge is yet another product of the famous 2001 AFL draft, and another brilliant captain to lead his side to Premiership glory.

The 283-game leader from Hawthorn has an impressive statistic no other TAC Cup player, past or present, has to their name; he’s a three-time AFL Premiership-winning captain.

The boy drafted from the Geelong Falcons lifted the cup for three consecutive years in 2013, 2014 and 2015, and could possibly do it once more before his time is up.

Even before being named captain in 2011, Hodge was seen as a spiritual leader by his teammates due to his professional attitude and inspirational acts.

Hodge has arguably played his best footy after being given the responsibility of leading the Hawks, and his numbers during each premiership year have been impressive.

His most impressive however, could be the 2015 Premiership-winning season. The kid from Colac, who plays most of his football from the half-back-flank or midfield, averaged an outstanding 26.76 disposals a game, kicked 21 goals, laid 93 tackles and registered 48 rebound 50’s.

Hodge also collected his most ever possessions in a game that year, with 44 against the Western Bulldogs in round three. He also racked up 24 or more disposals a game in the finals series, including a solid 30 touches in the Grand Final win against West Coast.

Hodge’s ability to inspire his teammates through his on-field leadership and his spectacular list of achievements, makes him one of the best captains, not only in the top 25, but in the league’s history.

Most would expect him to go well in the rankings.

Cameron Ling’s influence as captain and impressive list of achievements, has put him well and truly in the mix as well.

The ‘Mayor of Geelong’ led his side to a Premiership in his second year in charge, before retiring as a beloved champion from his teammates, fans, and members of the local Geelong community.

In 2007, one of Ling’s best seasons, he averaged nearly 20 disposals a game, kicked 28 goals as a midfielder, recorded 49 clearances and was rewarded with an All-Australian selection.

His Premiership-winning 2011 season was another outstanding showing from the boy drafted from Geelong Falcons in 1999. Ling collected 457 disposals for the season at an average of 21.76 a game, slotted 17 goals, recorded 69 clearances and ended the year as captain of the Cat’s ninth Premiership side.

Cameron Ling was renowned as one of the best elite taggers the game has seen, and his ability to lead his side to success has made him one of the best the top 25 has to offer.