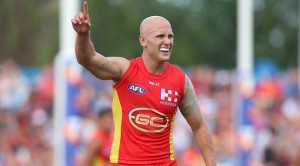 Former Geelong Falcon Gary Ablett Jnr. has been crowned the No.1 player from the 25 year history of AFL Victoria’s TAC Cup competition.

Chosen from over 1,000 former TAC Cup players drafted to the AFL, Ablett’s 288-game AFL resume was hard to overlook, featuring an overflowing trophy cabinet including:

Celebrating the success of the TAC Cup since its inception in 1992, the remarkable talent to have emerged from the competition was recognised with the ranking of the Top 25, featuring a who’s who of the best players in the AFL over the last two decades.

The final rankings, decided by a panel including Kevin Sheehan, Anton Grbac and Leon Harris, showcases the long list of achievements by former TAC Cup players in the AFL.

AFL Victoria Chief Executive Officer Steven Reaper said the competition has played an important role in developing players both on and off the field, as the Top 25 list highlights.

“The players recognised in the Top 25 are just a handful the 1000’s that have been educated within our TAC Cup program, helped to be safer road users through key messaging from our valued partner the Transport Accident Commission (TAC), this year focussed on the Towards Zero campaign,” Reaper said.

“Celebrating the 25 year history of the TAC Cup has provided an opportunity to recognise some of the top talent developed within our regions, and to acknowledge our long-standing partnership with the TAC since 1992.

“AFL Victoria would like to congratulate all the players selected in the Top 25, and thank the TAC Cup regions, coaches, volunteers and local clubs that have played a role in helping these players along the talent pathway.

“It is hard to go past Ablett as No.1 due to his long list of achievements at the game’s highest level.

“Ablett’s talent has been recognised by the umpires, fellow players and his clubs across his career to date, so his place as the best player in the TAC Cup Top 25 is well deserved.

1 Gary Ablett Jnr had his fellow dual Brownlow Medal winners in Judd (six) and Goodes (four) covered for All Australian honours, with the Modewarre FC junior joining Mark Ricciuto and Robert Harvey for the most selections of all-time with eight.

2 Chris Judd amassed five club best and fairest awards across his time at West Coast and Carlton, also enjoying premiership success with the Eagles in his 279 AFL games.

3 Adam Goodes was named the Bob Skilton Medallist – the Sydney best and fairest award - on three occasions, twice in his Brownlow years of 2003 /2006 across 374 games.

4 Brad Johnson also enjoyed six All Australian selections, but was the only member of the top five to not have celebrated a premiership during his 364 game career for the Western Bulldogs.

5 Matthew Lloyd was All Australian five times, to go along with his three Coleman Medals in his 926 goal career. However the Bombers’ goalkicker was the only member of the top five not to have won a club best and fairest across his 270 AFL games.