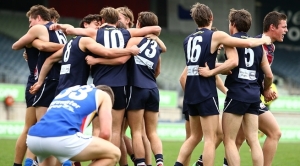 The weekend's TAC Cup finals action saw the Murray Bushrangers and Geelong Falcons advance to preliminary finals in two weeks, while the Calder Cannons and Eastern Ranges were eliminated from the premiership race.

The results mean the following matches will take place this Sunday September 11 at IKON Park:

Murray got the best of the minor premiers in a match full of momentum swings at IKON Park. Dandenong kept the Bushrangers goalless in the first quarter, lost a sizeable lead by half time and regained it at the last change thanks to six goals from Josh Battle. But six majors to two for Murray in the last quarter – led by five-goal hero Trent McMullan – secured victory.

Geelong kept North Ballarat at arm’s length throughout their contest at Box Hill City Oval to advance to a preliminary final. The Rebels conceded four of the first five goals of the game to the Falcons as well as the first four majors of the second quarter, and while they fought back late in quarters, Geelong – with forward Brett Blair booting five goals – always had the answers.

Sandringham came from 23 points down in the third quarter to pip Eastern in a thriller at IKON Park. Ranges forward Jaidyn Stephenson established the game-high margin when he booted his fourth goal, but the Dragons responded to snatch the lead by the last change. Eastern edged in front again in the final term, but Sandringham hero Corey Lyons slotted the match-winning goal soon after.

Oakleigh charged into a semi final by blowing Calder away before half time at Box Hill City Oval. Leading by 13 points at quarter time, the Chargers kept the Cannons to just two behinds in the second term while piling on seven goals themselves to put the match to bed. The onslaught continued in the second half, with Nick Larkey’s five-goal haul a big factor in the victory.