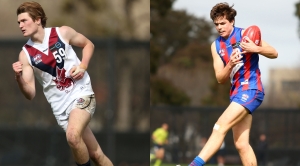 Minor premier Dandenong will have to bounce back from a humbling Qualifying Final loss to Murray against a team flush with in-form top-end talent. The Bushrangers beat the Stingrays up at contests and denied them the ball, with only Tom Glen (24 disposals, nine clearances) and Myles Poholke (23 disposals) offering much resistance in the middle. Sandringham’s first-choice on-ball division will be a force to contend with too, comprising national representatives Corey Lyons (31 disposals last week), Andrew McGrath (29, seven clearances), Tim Taranto (27, eight) and Will Setterfield (16 tackles, 10 clearances).

The contest could come down to how well Dandenong tall defenders Oscar Clavarino and Mason De Wit can control Dragons twin towers Hayden McLean and Isaac Morrisby (pictured - left) and provide chances for the likes of Bailey Morrish and Reece Piper to run the ball back out of Sandringham’s forward line. If the Stingrays can give last week’s six-goal hero Josh Battle or dynamic forward Dan Allsop – a star when his team defeated the Dragons by eight points in Round 14 – enough chances to hit the scoreboard, anything is possible.

Alarm bells will be ringing for North Ballarat ahead of a date with the TAC Cup’s September specialists, despite recording a 39-point win against the Chargers in Round 6. Oakleigh won last year’s premiership from sixth position and you wouldn’t tip against them being able to do it again based on last week’s demolition of Calder. The Rebels, meanwhile, lost captain Jarrod Berry (kidney damage) and Jacob Wheelahan (broken wrist) to serious injuries in their Qualifying Final loss to Geelong, but the positive is key playmakers Willem Drew (24 disposals, 12 clearances last week) and Morrish Medallist Hugh McCluggage (20 disposals, two goals) are in form.