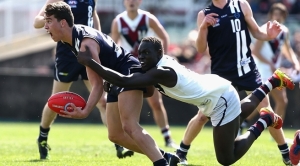 The Murray Bushrangers and Sandringham Dragons will face off in the 2016 TAC Cup Grand Final next Sunday September 25 at Etihad Stadium from 11.05am.

The Bushrangers controlled proceedings throughout their Preliminary Final against the Oakleigh Chargers to prevail by 44 points, while the Dragons had to dig deep after conceding a big early lead to defeat the Geelong Falcons by 22 points in Saturday's other Preliminary Final.

Both teams will be gunning for their third TAC Cup premiership next week, with Murray victorious in 1998 and 2008, and Sandringham the champion in 1999 and 2011.

The Bushrangers ended hopes of an Oakleigh three-peat of premierships with a dominant performance at IKON Park. Chargers forward Dion Johnstone kicked the first goal of the game but Murray responded with 12 of the next 14 majors, Lachlan Tiziani (six goals) helping establish a defining 30-point half-time margin with three in as many minutes approaching time-on in the second quarter.

Fletcher Carroll was prolific throughout, while the marking ability of Todd Marshall in attack and Ryan Garthwaite in defence saw the Bushrangers take further control during a five-goal-to-one third term which effectively killed the contest. While Oakleigh outscored them in the final stanza, it was all too late as Murray became the only member of an all-Country top-four to make it through to the TAC Cup Grand Final.

The Dragons continued their run to the TAC Cup Grand Final from fifth position by coming from behind to defeat the second-placed Falcons at IKON Park a week after knocking off minor premiers the Dandenong Stingrays. Geelong initially caught Sandringham napping, kicking six of the first seven goals of the game to open up a 31-point lead early in the second quarter.

But despite losing play-maker Will Setterfield to injury by half time, the Dragons worked their way back into the contest with Tim Taranto (four goals) dynamic up forward, Andrew McGrath prolific in the middle and Max Williams a wall down back. The Falcons were ultimately stopped in their tracks as five unanswered final-term goals saw Sandringham overcome a 10-point deficit at the last change to prevail.

The game will be broadcast on FOX FOOTY, TAC Cup Radio and SEN.