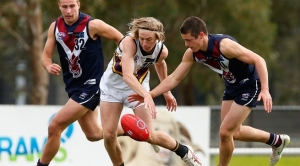 taccup.com.au previews the 2016 TAC Cup Grand Final between the Murray Bushrangers and Sandringham Dragons, taking place at Etihad Stadium from 11.05am on Sunday.

Both teams are gunning for their third TAC Cup premiership.

The Bushrangers won flags in 1998 and 2008 after finishing the home-and-away season in third and first position respectively, and have also lost deciders in 2003 and 2007. Former Port Adelaide AFL player Michael Stevens won the 1998 Grand Final Best-on-Ground Medal in a 36-point victory over the Geelong Falcons when Kelly O’Donnell was coach, while Collingwood star Steele Sidebottom claimed the honour for his 10-goal performance in an 81-point triumph over the Dandenong Stingrays in 2008 under the coaching of Phil Bunn. In 2003 and 2007 however, the Bushrangers suffered losses to the Calder Cannons of 92 and 60 points respectively.

The Dragons were champions in 1999 after finishing the home-and-away season in third position and in 2011 after finishing second. Brad Gotch coached Sandringham to a 50-point victory over the Gippsland Power in 1999 with Dylan Smith named the best player on the ground, while current Collingwood VFL coach Dale Tapping held the reins in 2011 when the Dragons recorded a thrilling eight-point triumph over the Oakleigh Chargers, with Melbourne midfielder Jack Viney the Best-on-Ground Medallist for Oakleigh.

Round 15: Murray 11.10 (76) d Sandringham 8.11 (59) at Rams Arena
Despite going scoreless in the first term and then trailing by 19 points at three-quarter time, the Bushrangers flew home with the breeze. Their win was built on dominance at the contests with Fletcher Carroll (24 disposals, six clearances) and Isaac Wallace (23 disposals, seven tackles) standing out, while James Cousins and Todd Marshall both kicked three goals. The Dragons were best served by Corey Lyons (32 disposals, seven clearances, one goal), but their forwards were unable to stop the rebounding ability of Murray defenders Ryan Garthwaite and Zac Sproule.

HOW THE BUSHRANGERS CAN WIN

Murray’s midfield has controlled the stoppages in their two finals victories, winning the contested possession count by 30 and clearance count by eight in the Qualifying Final against Dandenong and the same categories by 43 and seven respectively last week against Oakleigh. Will Brodie, Fletcher Carroll and James Cousins have been crucial to this dominance, served by ruck combination Max Lynch and Harry Boyd.

The big men will need to negate mobile Dragons ruckman Lachlan Filipovic to give their midfielders first use of the ball against a star-studded Sandringham engine room. If that happens, Murray’s three-pronged tall forward attack of Lachlan Tiziani (10 finals goals), Trent McMullan (seven) and Todd Marshall has the potential to win the aerial battle against an unheralded Dragons defence, while smaller types Damon Hemphill and Charlie Spargo have also been dynamic at ground level during the finals.

Even if the Bushrangers don’t win the ball at the coalface, they may still have the tall defenders to foil Sandringham’s forward forays. The intercept and rebound ability of Ryan Garthwaite and Zac Sproule has created a wall across Murray’s half back line recently and a key question will be whether Dragons key forwards Hayden McLean and Isaac Morrisby can limit their influence.

HOW THE DRAGONS CAN WIN

Sandringham’s ability to move the ball dangerously by linking up with handballs is one of its biggest strengths. The Dragons are no slouches at the stoppages, comfortably topping Eastern, Dandenong and Geelong in the contested possession and clearance counts in their three finals wins, but it’s what they do outside the contests that’s most eye-catching.

Andrew McGrath, Corey Lyons and Harrison Burt are not only some of their team’s best clearance-winners, they’re also regular big contributors to Sandringham’s handball-receives tally. Other hard runners do so off half back, with Jack Scrimshaw particularly adept at constructing play from defence along with Reuben Hayward, Darcy James and Liam Murphy.

Head coach Jeremy Barnard clearly values slick ball movement highly, and if key defenders Connor Larkin, Ari Sakeson and Max Williams can out-mark Murray’s dangerous forward targets or just bring the ball to ground, the Bushrangers will need to be on their guard to stop the ball flying straight up the other end. Bottom-age talls Hayden McLean and Isaac Morrisby will need good delivery inside 50 to limit the influence of Murray interceptors Ryan Garthwaite and Zac Sproule, while classy mid-forwards Tim Taranto (six finals goals) and Oliver Florent (three) won’t need many gilt-edged chances to tear the game apart.