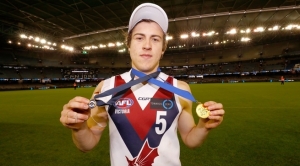 Sandringham Dragons premiership star Andrew McGrath capped a stellar football year by being awarded the TAC Medal for the best player on the ground in Sunday’s TAC Cup Grand Final.

The 179cm midfielder/defender recorded game-highs of 38 disposals, 21 contested possessions and eight clearances, including 28 touches in an influential second half that helped keep Sandringham’s nose in front of a dogged Murray Bushrangers outfit at Etihad Stadium. The Dragons led by only five points with less than four minutes to play before consecutive late goals sealed their 17-point triumph.

18-year-old McGrath has exploded into contention to be the no.1 pick at November’s NAB AFL Draft on the back of his performances for Sandringham and for Vic Metro at the 2016 NAB AFL U18 Championships.

He earned U18 All Australian selection and was the joint-winner of Vic Metro’s MVP Award after averaging 24 disposals per game across four matches as co-captain of the undefeated Metro team.

The East Brighton junior was named in the TAC Cup Team of the Year after averaging 32 disposals per game in 10 matches for the Dragons and also captained Brighton Grammar to a third consecutive premiership in the Associated Public Schools competition.

He said Sandringham’s run to the flag from fifth position following the home-and-away season was the “perfect end to a good year”.

“It’s hard to put into words,” McGrath said of his feelings after the Grand Final.

“We were all panicking a little bit (towards the end of the game), but we had that little buffer of a lead. We’ve been in a few tight games this year and won, so we backed our ability in and controlled the tempo of the game and got a few goals out of that.

“We were nervous, but we’d been in that situation before.”

McGrath is part of a talented, highly-rated core of Dragons to have experienced the intensity of national-level under-age football along with Tim Taranto, Oliver Florent, Corey Lyons and Jack Scrimshaw. All of them stood up when it mattered on Sunday.

The Dragons may have lost the contested possession, clearance and inside-50 counts to Murray, but their ability to skilfully control the ball until the right option presented was reminiscent of an AFL game style.

McGrath may indeed graduate to the elite level later this year, but with the U18 All Stars match on his “hectic” agenda this Friday afternoon at Punt Road Oval, as well as the NAB AFL Draft Combine from October 6-9 and then Year 12 exams shortly after that, he can’t afford the time to listen to speculation on his draft prospects.

“It’s a tough next month,” McGrath said. “I finish exams pretty early, so I’ll probably go away for a week, wind down and let the body and mind recover.

“You try not to read into it (draft speculation) too much. You just show up every week, play your best footy and let the media and everyone else do their job I guess.

“At the start of the year, my goal was simply to just get drafted. I think I’ve put my best foot forward so far and hopefully that dream comes true come November.”