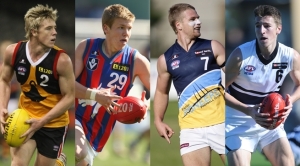 26 former TAC Cup players will run out for Sydney or the Western Bulldogs in Saturday’s AFL Grand Final at the MCG after teams were named Thursday night.

The Swans line-up  - with just two changes - will see 10 players appear on the game’s biggest stage who were drafted out of the TAC Cup as well as Ben McGlynn, who represented the Bendigo Pioneers before later being drafted from the VFL’s Box Hill Hawks.

11 of the 12 TAC Cup clubs will have past players involved in the Grand Final based on no changes on game day. The Oakleigh Chargers lead the way with four representatives, ahead of the Dandenong Stingrays, Geelong Falcons, Gippsland Power, North Ballarat Rebels and Sandringham Dragons with three each. The Bendigo Pioneers and Calder Cannons have two past players on the list, while the Eastern Ranges, Northern Knights and Western Jets have one.

See the full list of former TAC Cup players in line to appear in the AFL Grand Final below.