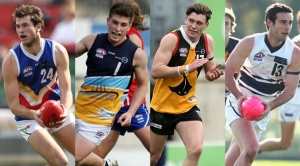 The top players in the TAC Cup and NAB AFL U18 Championships for 2016 were recognised with selection in the TAC Cup Team of the Year at the recent Morrish Medal night.

Last year’s TAC Cup Team of the Year featured 20 players that were later selected by clubs in the 2015 NAB AFL Draft or Rookie Draft. Let’s take a look at the talented Victorian youngsters who’ll be hoping to follow a similar path in 2016.

DEFENDERS
The cornerstones of the Team of the Year back line are All Australians Jack Maibaum (Eastern Ranges - pictured, left) and Andrew McGrath (Sandringham Dragons). 193cm Maibaum was the state’s standout key defender in 2016, while McGrath elevated himself into contention as a top-10 draft pick with his performances across half back and in the midfield. Gippsland Power big man Josh Patullo impressed in roles as a key defender, key forward and ruckman this year, while Brodie Romensky (Western Jets) has the versatility to play in defence or as a bigger-bodied on-baller. Mason Blakey was a consistent performer for the Northern Knights as a lock-down backman and Taylin Duman’s run and class was important for the Oakleigh Chargers.

MIDFIELDERS
199cm Lachlan Filipovic (Sandringham Dragons) anchors the Team of the Year midfield as a mobile ruckman, with two All Australians alongside him in the centre – Morrish Medallist and smart, goalkicking on-baller Hugh McCluggage (North Ballarat Rebels) and tough inside midfielder Will Brodie (Murray Bushrangers). Fellow All Australian and Eastern Ranges captain Dylan Clarke is the team’s centreman following a prolific season, while consistent ball-winner Willem Drew (North Ballarat Rebels) and Bendigo Pioneers skipper Joseph Atley (pictured, second from left) were named on the wings.

INTERCHANGE
Reliable ball-winners James Cousins (Murray Bushrangers) and Luke Bunker (Northern Knights - pictured, right) earned selection on the Team of the Year interchange, along with three Eastern Ranges teammates: forward/midfielder Josh Begley – who emerged from local football at the start of 2016 – All Australian mid-forward Callum Brown, and 200cm All Australian ruck/forward Sam Hayes. Hayes was one of only two bottom-age players selected in the Team of the Year, along with Geelong Falcons midfielder James Worpel.