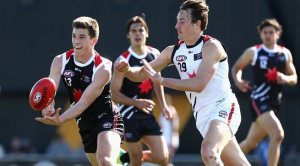 A number of TAC Cup players had one final chance to impressed recruiters with strong on field performances in last weekend’s NAB All Stars games at Punt Road Oval, as James Szabo reports.

The Under-18 clash, a game played between the best young talent in the country, enabled scouts to have one last glimpse at this year’s potential draftees.

Chris Judd and Michael O’Loughlin were ambassadors for the game, with the sides being named after them.

The clash ended in favor of the Judd side, who beat Michael O’Loughlin team by seven goals.

Taranto’s 19 disposals and four goals helped his team to the comfortable victory.

The 186-centimeter midfielder was judged as the best player for his side, and also played a big role in the Dragons’ premiership win the previous week.

Hugh McCluggage, who won this season’s Morrish Medal as the TAC Cup’s best and fairest, also kicked four goals and confirmed his credentials as a first round draft pick.

Collingwood father-son prospect Daicos picked up 18 possessions, while the 180-centimeter McGrath worked hard all day to showcase why he is early draft prospect.

The O’Loughlin team stayed competitive thanks to the efforts of Eastern Ranges’ Callum Brown and Sandringham Dragons duo Jack Scrimshaw and Oliver Florent.

Florent was named as the best player on the ground following his 29 touches, seven inside 50’s and seven clearances.

His exciting run and carry, along with the ability to hit targets was evident all day, further highlighting his chances of being a first-round choice at the draft.

177-centimeter midfielder Brown, who is also the son of former Collingwood star Gavin, racked up 21 disposals, while Scrimshaw further established himself as a handy midfielder with impressive skills.

Saturday’s Under 17’s clash also fell in favor of the Chris Judd team, who ended up winners by 13 points.

The game, which is used as an opportunity for scouts to have a look at some of next year’s potential draftees, also produced some classy football from TAC Cup players.

Bendigo Pioneers’ Lochie O’Brien and Dandenong Stingrays’ Hunter Clark were the standouts for the Chris Judd side.

Worpel had 18 touches and Spargo picked up 16 and kicked a goal.

Oakleigh Chargers’ Jack Higgins was the best player for the O’Loughlin side, with his 24 possessions and one goal.

Eastern Ranges’ Joel Garner was also good with his 19 possessions, while Western Jets’ Lachlan Fogarty was lively with 19 disposals and a goal.

NAB All Stars Under-18

NAB All Stars Under-17