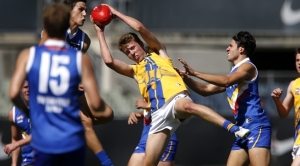 Classy Western Jets ball-user Judah Dundon learnt a lot about himself while spending a significant part of 2016 on the sidelines.

The 186cm Werribee Districts product missed the first three rounds of the TAC Cup season with a stress fracture in his right fibula and then the final seven weeks of Western’s year after suffering the same injury in his opposite leg.

In between, Dundon averaged 19 disposals and four marks per game as well as kicking six goals in eight TAC Cup matches playing mostly as an outside midfielder.

taccup.com.au talked to Dundon at the recent NAB AFL Draft Combine, where he was unable to participate in physical testing as he recovers from his leg injury.

“My strengths lie in the outside game, and my kicking especially – also my ability to go forward and back and play on a wing at stages. So I’ve been trying to sell myself as a really good kick and someone who’s really versatile.”

“One of the weird ones was to count down from 505 by sevens – also, spell ‘aardvark’ backwards.”

“I think my contested ball needs significant improvement, as well as my opposite foot. Right now it’s good, but to be an elite player I think my right-foot kicking has to be at the next level.”

“I model my game on (Western Bulldogs’) Lachie Hunter a lot. I think his left-foot ability is really good and he’s a really well-rounded player. I think my left foot resembles his a bit and if I have half the career he’s had so far, I’ll be a happy man.”

“I didn’t expect it to go as quick as it has, but I’ve really enjoyed it even though I’ve had adversity along the way. I’ve been able to be in environments such as Vic Metro for a while there and train and play with some really elite players.”

What have you learnt about yourself during your time on the sidelines this year?

“I’ve learnt that I’m a pretty courageous person with the two injuries I’ve had. I’ve also been able to stay relatively positive. I also think I’ve learnt that I’m really good at readjusting my goals – sometimes your big goals don’t happen and it’s time for you to reassess them. Being cut from squads (like Vic Metro), having injuries and missing out on things, I’ve had to do that at times this year. Achieving little goals (instead) is something I’ve improved on and I think it’ll hold me in good stead for the future.”

“I got a chance to be captain for one game (a win against Oakleigh in Round 10) with certain boys playing nationals and enhanced my leadership qualities there. It was probably one of my better games of the year (24 disposals, 11 inside-50s, five tackles, two goals).”

Oscar Junker and Daniel Venables: “They’ve both had pretty good years, playing nationals and Dan getting an All Australian gig as well. I think he’ll be happy on November 25th when that comes around – hopefully Oscar as well. To become really good mates with them is probably what I’ve taken most out of this year and hopefully we can be mates wherever our footy careers take us.”

“I want to go to uni and get a teaching degree, probably secondary teaching. A lot of the coaches I’ve had over the years also have teaching backgrounds as well, so if I want to get into coaching later on in my life, I think teaching is a really good transition job for that.”

“I’m going to go for (Sandringham’s) Andy McGrath. I think with the qualities and the talent he has, he’ll be a really good no.1 pick.”