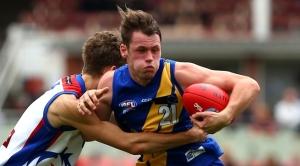 Injuries restricted Daniel Venables to only fleeting appearances for the Western Jets and Vic Metro this year, but that was all the time the dangerous match-winner needed to make an impact.

The 186cm Keilor product came into 2016 after a long lay-off due to a broken leg and finished it with his foot in a moon boot after sustaining an injury while playing for Penleigh and Essendon Grammar.

In between though, Venables starred in Metro’s undefeated NAB AFL U18 Championships campaign. He was named in the U18 All Australian forward line after booting six goals and averaging 12 disposals and five tackles per game in four matches as a dynamic forward/midfielder. He also made three appearances for the Jets early in the season, when he kicked six majors and averaged 12 disposals and four marks per game.

taccup.com.au talked to Venables at the recent NAB AFL Draft Combine, where he didn’t participate in physical testing having only just finished his time in the moon boot.

“My footballing strengths are that I’m quick and explosive, and I’m a good mark and a good goalkicker.”

“Probably counting back from 900-and-something by sevens. I got stuck but I kept going!”

“I’d have to get my fitness level up. That’s probably the main one at the moment.”

“I like watching (West Coast’s) Luke Shuey. He’s pretty quick and explosive out of packs as well, and likes to run and carry and kick goals. I think as I develop, I’ll be more of a midfielder that rests down forward.”

How did you come to the decision to choose playing footy over cricket?

“I think probably last year was when I realised I wanted to play footy. Cricket’s just long days in the field when you’re getting smacked around. I still love cricket and I still watch it all the time, but I just think footy’s for me. The decision was pretty easy, I guess – I’ve always wanted to be a footballer.”

“I guess after breaking my leg last year, I didn’t really have any expectations. To be All Australian and in the TAC Cup Team of the Year, I’m pretty proud of that achievement.”

“I think (the win for Vic Metro) against South Australia (in the U18 Championships) – I kicked two goals, laid nine tackles and had 16 possessions. It was just a good defensive game.”

- Judah Dundon: “Judah’s a bit like me – pretty injured this year. I’m happy for him. He’s had to work pretty hard and he’s reaping the rewards now.”
- Oscar Junker: “He had a bit of a slow start to the year coming back from a shoulder injury, but he’s very skilled and very tall – a big left-footer.”

“I’d probably be an electrician, I reckon. I like being hands-on and it’s just an interest I have.”