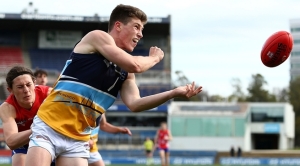 But the 186cm Rochester product is hardly a chip off his elder sibling’s block. While 24-year-old Shaun has made a name for himself at the Kangaroos running the ball out of defence, Joe does his best work at the coalface, regularly dishing out handballs to teammates from congestion.

Atley shone at the contests at several levels this year. He was named in the TAC Cup Team of the Year midfield having averaged 22 disposals and six tackles per game in 11 matches for the Pioneers, he represented Vic Country at the NAB AFL U18 Championships averaging 20 disposals, five tackles and four clearances per game across three matches and also made two appearances for Geelong in the VFL.

taccup.com.au talked to Atley at the recent NAB AFL Draft Combine, where he recorded the equal-second-best score in the goalkicking test and finished in the top 10 of the clean hands test.

“I love the contest. I pride myself on contested ball. And at the end of the day, I want to win a premiership.”

“I don’t know... But they tell me that I handball too much. I like to think that I’m sharing it more than most people.”

“I like (Sydney’s) Luke Parker and (North Melbourne’s) Ben Cunnington.”

How did you handle being captain of Bendigo this year?

“They didn’t put too much responsibility on me. I guess it was just ‘let the footy do the talking’, but every now and then we’d have our meetings. I like to think I’d get along with most people at a club and have good relationships with people.”

“I probably would have liked to win a few more games (the Pioneers finished with a record of 4-14). I think I was consistent enough but nothing outstanding. I loved playing for Vic Country – I love playing with the better kids around.”

“Probably the Allies game (for Vic Country at the U18 Championships – 21 disposals, six clearances, four tackles in a loss). My efficiency and use of the ball, clearances and tackling (were highlights).”

“Probably Andrew McGrath from Sandringham. He’s a pretty smart footballer – he uses blokes as chop-outs around the stoppages. I was playing on him for a few of the stoppages (in Bendigo’s Round 17 loss to the Dragons).”

- Kobe Mutch: “First of all, he’s a good bloke. He gets so much of the footy, gets in the right spots and works hard.”

“I’d like to think I’d be a builder or landscaper – something outdoors.”