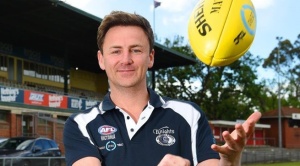 The new head coach of the Northern Knights certainly isn’t new to the TAC Cup – in fact, Justin Wenke knows exactly what it takes to reach the competition’s pinnacle.

The 42-year-old takes over from three-year Northern coach Andrew Shakespeare after ending his premiership-winning stint as mentor of the Oakleigh Chargers early in the 2014 season.

Wenke guided the Chargers to the 2012 TAC Cup flag from sixth position after the home-and-away season in his first year as head coach. The Chargers then missed the finals in 2013 before Wenke left the club during the following season due to personal reasons.

After three consecutive years without making the finals, the Knights have appointed a coach with a pedigree of TAC Cup success – even if that success was achieved in rather unorthodox circumstances.

“The 2012 Grand Final (against the Gippsland Power) was quite unique because it was won by a golden point,” Wenke said.

“I have the memory of (now Western Bulldogs premiership player) Jackson Macrae kicking that point to put us in front and then the siren going. It was quite an amazing feeling.

“Believe it or not, we as a coaching staff spoke to the players on the Thursday night about the golden point concept. You just try to prepare them, and the moment happened and they responded accordingly.”

While he oversaw the top-age years of AFL draftees such as Jack Viney (Melbourne) and Jack Billings (St Kilda), Macrae’s rapid progression to become the no.6 pick in the 2012 NAB AFL Draft was one of Wenke’s most satisfying stories of player development at Oakleigh.

“Jackson was a boy who didn’t make the list as a bottom-age player at the Chargers,” Wenke said. “I’d had a long association with him through the Yarra Junior Football League interleague teams I’d coached, so I knew what he was capable of. He had to work on his kicking a bit, but we put him on the list as a top-ager and he became a really high draft pick.

“The other one was (Macrae’s fellow 2016 Bulldogs premiership player) Toby McLean, who was cut at the Dandenong Stingrays and then we brought him in. He was a different sort of character – most of the Chargers boys were private-school boys but Toby had left school.

“Integrating him into the system was a real feather in the cap of the Chargers, to take in a boy that had talent and develop him a little bit, and then he was the best-on-ground medallist on Grand Final day (in 2014) and got drafted really highly.

“They’re the success stories you look at, and it’s probably why you coach – to pick up the ones that may slide through and give them another chance.”

Indeed, Wenke said his time at Oakleigh taught him the importance of treating each player as an individual and that he’s now ready for “a new challenge in a new region”.

Among those to have impressed Wenke since he arrived at Northern at the end of October are Nick Coffield and Ethan Penrith – who both played plenty of games as bottom-agers in 2016 – as well as Max Dreher, who Wenke said was performing well on the training track and could be the club’s “smoky” early in the 2017 season.

He also said the Knights will look to move the ball more directly than they did in 2016.

“The first priority is to make sure we play a brand of footy that’s attractive to recruiters,” Wenke said.

“We ranked really high in disposal efficiency in 2016 but I think we ranked last in regards to efficiency inside our 50 or disposals per goal, so we just need make sure we’re making some better decisions with the ball in hand and giving our forwards more of a chance.”

Wenke said the style of play he’ll bring to Northern won’t be dissimilar to that which he introduced to Oakleigh five years ago – a style ultimately validated with a trophy delivered by Jackson Macrae’s golden point on Grand Final day the following September.