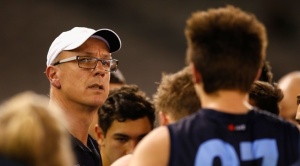 AFL Victoria is pleased to announce the appointment of Michael Wilson as the new Murray Bushrangers Talent Manager as well as several coaching changes for the Vic Country and Vic Metro Academies in 2017.

Wilson, a four-time premiership player across 319 games with the Wangaratta Rovers in the Ovens & Murray Football League, comes to the 2016 TAC Cup grand finalists having most recently worked as State Manager for the Bluearth Foundation, a charity that promotes the physical, social and emotional wellbeing of children.

Wilson also has a teaching background and has coached various football teams, including Murray’s U15 squad, Ovens & Murray FL interleague teams and Tarrawingee in the Ovens & King Football League (winning a premiership in 2010).

He takes over the Talent Manager position from Lee Fraser, who recently moved into a role with AFL Victoria as Country Talent Pathways Manager. Fraser praised Wilson’s “proven ability to lead organisations and young people”.

“Michael will provide a real focus on the local community and a passion for developing young athletes both on and off the field,” Fraser said.

“He will work closely with (Murray’s) full-time coach Leon Higgins and High Performance Manager Matt Glossop to further strengthen the existing programs while focusing on the continued development of the Youth Girls and Next Generation Academy relationships with the Richmond Football Club.”

Meanwhile, Matt Battistello has been appointed as Vic Country’s coach and Martin Allison (pictured) as Vic Metro’s mentor for the 2017 NAB AFL U18 Championships.

Battistello coached the Vic Country U16 team in 2016 after previously spending four seasons as senior assistant coach at the North Ballarat Rebels. He takes the reins as U18 coach from Paul Henriksen, who led Country through the 2015 U18 Championships undefeated during his first year in the role. Battistello will be joined by current TAC Cup head coaches Craig Black (Dandenong Stingrays), Leigh Brown (Gippsland Power) and Leon Higgins (Murray Bushrangers) as his assistants in 2017.

Allison replaces 2016 U18 Championships-winning Vic Metro coach David Flood after 15 years in various coaching roles with the Calder Cannons (head coach from 2009-12 including premierships in 2009 and 2010), Vic Metro and Vic Country. He’ll be joined in the Metro Academy by Indigenous Team of the Century member and three-time Brisbane AFL premiership player Chris Johnson, who will coach Metro’s U16 squad in 2017.

In other news within the Victorian talent pathway, AFL Victoria Head of Athlete Management Nathan Heaney will take the next step in his career after seven months with the organisation, accepting a role as Physical Performance Coach with Adelaide’s AFL team.

* Photo: Martin Allison working with the Vic Metro U18 team in 2013